Popular Mainland Chinese reality program Viva La Romance <妻子的浪漫旅行> is back with its fourth season, and celebrity couple Ada Choi (蔡少芬) and Max Zhang (張晉) are among the cast members. Ada is the fourth Hong Kong female artiste to participate in the program, following the footsteps of Cherrie Ying (应采儿), Anita Yuen (袁詠儀), and Miriam Yeung (杨千嬅). Like previous seasons, host Xie Na (謝娜) will lead the celebrity wives – Ada, Gina Alice Redlinger (吉娜), Hu Ke (胡可), and Zhang Xinyi (张歆艺) – on a trip. In the first episode that just aired, the wives were given the task of throwing a surprise event for their husbands before embarking on their journey. 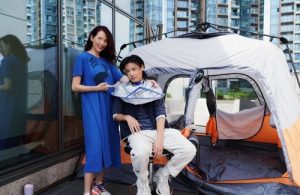 Ada secretly set up a tent on the rooftop and stocked the tent with all kinds of hair products, intending to give Max a haircut. She gave him a cup of coffee before inviting him to her makeshift “Ada’s Salon,” where the surprised and scared Max let her have her way with his hair despite her lack of skills. After many clumsy moments and cries for help, Max’s new haircut eventually turned out well. Ada shared that the first time she cut his hair was when they were dating. “At that time, his hair was long and it was dyed blonde, which damaged his hair and caused split ends,” she shared.

Ada revealed Max’s blonde hair left a very bad impression on her friends, including her good friend Catherine Hung (洪欣), who even advised her to not date “this blonde punk.” 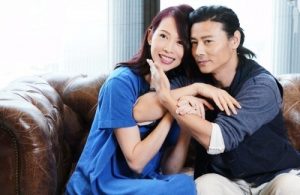 After Ada finished cutting Max’s hair, she had to complete a second mission that required her to call a celebrity friend and ask them for their impression on the couple. The actress contacted her good friend Gigi Lai (黎姿), who praised the couple’s compatibility. Gigi teased, “Max is 100 percent a good husband for sure, but Ada needs to be more gentle and talk more softly because she can get hot-tempered so easily.”