ViuTV drama The Gutter <歎息橋>, produced by and starring Bowie Lam (林保怡), ended its 15-episode run on May 29, 2020. As another critically successful series surfaces in a time when the TVB monopoly is still going strong, it makes one think—are people even still watching Hong Kong dramas? Is it still a profitable industry? Or is the industry on its last legs, much like the film industry? 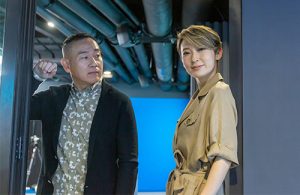 In an interview with Yau Tai-tung (游大東), The Gutter actors Bowie Lam and Catherine Chau (周家怡) shared their thoughts on the current state of the HK television industry and what they can do to support the industry as it faces increasing competition from all fronts.

“Why should I stop?” said Bowie when asked if he still watches TVB dramas. Bowie’s last TVB drama was 2011’s When Heaven Burns <天與地>. “We can all still learn from them. I recently watched Brutally Young <十八年後的終極告白>.”

When one thinks of the downfall of Hong Kong TV dramas, one would immediately think TVB. The station, which has ruled the Hong Kong TV industry for over half a century, is being targeted with the ‘plastic’ label, a name that has clung onto them for the past decade. TVB’s lack of competition within the local market had put them in a safe place, but as the world opens up to a larger global market, TVB finds that it is actually far behind the rest of the world.

But according to Bowie, TVB shouldn’t be blamed for the downfall of HK dramas.

“When people say ‘Hong Kong dramas’, what are they referring to?” asked Bowie. “What are the elements of a HK drama? Who’s making them? Do you mean TVB? People need labels. They say that TVB is the reason behind the death and the fall of HK dramas. Okay then. But you, as a viewer, also has a choice. That choice was always there for you. If you don’t like them, don’t watch them.”

Catherine added, “Think about it. Once you add a label to something, how do you think the people working on the show would feel? ‘Oh, that’s made by them? I’m not watching it!’ At least be curious and check it out! Note the good things and the bad things.”

In the eyes of a producer, does Bowie feel that the HK television drama industry is failing? “How is that so?” Bowie asked instead. “People are still making dramas. ViuTV is making a lot.” Catherine pointed out that HK dramas need to be braver in testing out different genres. Bowie agreed, and pointed out the time traveling drama Leap Day <二月廿九>, which aired on Viu TV in March. “It has a very interesting topic,” he said. 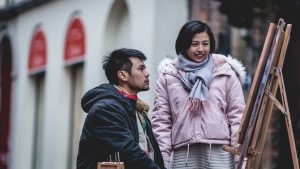 Nostalgia is a powerful drug. Yau Tai-tung pointed out that many viewers have been hoping to revisit Hong Kong’s golden years of television. “You have to educate the viewers,” said Bowie. “Yes, we’ve made a lot of classics in the past, but every single one of us has to move forward eventually.”

Catherine said, “Even if you think about the past, it is still the past. No matter how classic that drama is, it’s still something from the past. Why should we use the standards of the past to make something today? If you want to watch a classic, watch the classic channel!”

Reflecting on “The Gutter”

The Gutter is Bowie’s first drama as producer, and his tenth collaboration with Catherine. From its unique story-telling format, to its characterization, background music, and even camera shots, The Gutter has drawn the attention of many drama critics. However, the cast of The Gutter was hardly mentioned in critique essays and forum discussions. 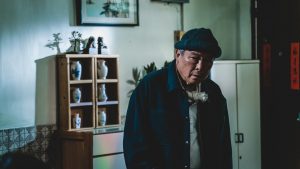 The drama features three generations of actors, ranging from 88-year-old Lau Siu-ming (劉兆明) to 12-year-old Leander Lau (劉皓嵐). All 11 characters on the show are played by two different actors, representing the different stages in each characters’ lives. Pointing out that The Gutter has the budget to hire more expensive actors due to the support ofChina’s Youku, Bowie said, “Of course having money is important, but the selection of propers actors is just as important.”

Bowie gave directors 25 and Fatball the full authority in casting the show. “You have to consider the background of each character. How are their parents like? What do they do? Everything has to be fully dimensional in order for the [younger] actors to get a better grasp of their role, and when they have control of their characters, then it will make our job as the older actors easier.”

Most of the criticism of the show went to Ken, played by Hanjin Tan (陳奐仁). Ken is an unlikable character, and many viewers called the role as The Gutter’s worst moment. Bowie said he feels obligated to defend him.

“[Ken’s] mother had put a lot of stress on him since his youth,” said Bowie. “That’s why he has such a huge emotional breakdown, and even to the point of developing schizophrenia. He doesn’t know it himself. I was supposed to play Ken, but considering the commercial side of marketing, it would be better for me to play Thomas so Catherine and I can couple up.”

He admitted that casting Hanjin to play Ken was a bold choice. “To ask a singer to play a heavy role like Ken is asking a lot. That’s why we chatted with Hanjin for long time about the role, from dinner time till four the next morning.”

Interestingly, The Gutter is Bowie’s first drama with Lau Siu-ming (Ming Sir), who plays his father. “It was both of our dreams to work together,” said Bowie. “Our only collaboration prior to this was a play in 2009. We admire each other very much, and a collaboration like this has been in talks for a while.”

One of Bowie’s most unforgettable experiences with Ming Sir was in the first episode of The Gutter. It is the scene where Bowie and Ming Sir fight in their old home. “He just came in and yelled out that he was ready,” said Bowie. “He was all dressed up for his role. He already memorized all of his dialogue and everyone else’s. Filming went by smoothly.” 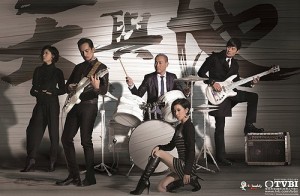 When Heaven Burns, Bowie and Catherine’s last TVB drama together, will be entering its tenth anniversary next year. Asking if there would be a possibility for the cast to come together again to do another project, Bowie said, “First off, I don’t have a say in this. I think Producer Jonathan Chik (戚其義) should be the one with the say. I’m just a drummer. But I would love to drum again.”

Asking if Bowie had considered contacting Jonathan Chik for another drama collaboration, he said, “That’s always a possibility. (Would it be possible to gather WHB cast together to do a different project?) It’s not impossible. I have actually reached out to them before, but when you’re in this industry, it isn’t easy to make things work.”