At the end of 2019, Jordan Chan (陳小春) announced that he and his wife, Cherie Ying (應采兒), were expecting their second child. Cherie recently gave birth, but the couple did not reveal any photos or the gender of the baby.

Sharing a family photo which was taken during her pregnancy, Cherrie wrote, “A family of four. Blessed.” Welcoming his new child, Jordan thanked the couple’s family, friends, and fans for their blessings and well wishes. He especially shared his thanks to his wife and wrote, “Thank you for the hard work, my queen. Mothers are so selfless.”

In an earlier interview, Cherie revealed that the couple intended to have another child. However, their first child, Jasper, was afraid that a new sibling would divide his parent’s attention and he would have to share his toys. It was only until Jasper finally gave his thumbs up that the couple began making plans for a new baby. Jasper is now promoted to older brother! 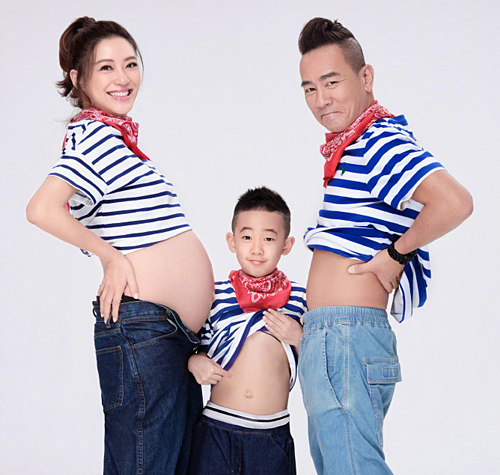 Netizens spotted Angelababy with pigtails and a bare face.

At his Taipei concert on Saturday, Jordan Chan announced that his wife Cherrie Ying is three months pregnant.

Jordan is focused on raising his son to be independent and capable of making his own decisions.