Generating plenty of online buzz since premier with its star cast of 33 male celebrities including actors, singers and rappers, reality show Call Me By Fire <披荊斬棘的哥哥> aired its finale on October 29, announcing the winning line-up of 17 stars! 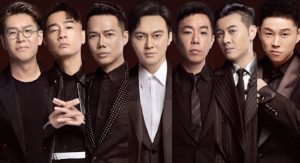 As he went on stage to deliver his thank you speech, cameras panned to Jordan’s wife and actress Cherrie Ying (應采兒), who dramatically gestured to remind her husband to thank her, much to the audience’s amusement. Enjoying a popularity boost from the show, Jordan started by chatting about his emotional journey on the show, and politely thanked the crew along with his family towards the end of his speech. “Thanks to my wife, thanks to my two sons at home, and thanks to all behind the scenes and onstage who have contributed towards Call Me By Fire.” Hearing this, Cherrie revealed a satisfied smile and blew an air-kiss towards the screen. The couple, who are 16 years apart, had delighted viewers with their hilarious and genuine interactions throughout the show.