Not long ago, Angelababy (楊穎) took her son Little Sponge to Hokkaido for a skiing trip during the Christmas holiday. Although Angelababy dressed plainly and didn’t have on any makeup, netizens still recognized the actress and excitedly snapped photos of the mother and son duo. Whenever Angelababy noticed someone sneaking photos of her, she would turn her head away. Coincidentally, Jordan Chan (陳小春), Cherie Ying (應采兒), and their son Jasper were also at the same resting area. However, Huang Xiaoming (黃曉明) was not seen, sparking rumors of marital discord once again.

Netizens couldn’t help but wonder if Angelababy and Xiaoming are still married. The two were repeatedly rumored to have marriage issues since last year because of their lack of interaction and photos together, but the two have not addressed the speculations.

The media often photographs Angelababy taking Little Sponge out or Xiaoming playing with Little Sponge, but the couple is rarely seen having family time together. At the CCTV Mid-Autumn Festival Gala in September, both stars were present at the same venue, but they sang duets with others, did not show up together, and stayed at separate hotel rooms.

Moreover, they seem to lack communication between them. When Xiaoming appeared at the airport and fans asked him about his wife’s whereabouts, he appeared embarrassed and nervous. He was so nervous that he wiped his sweat with his hands.

This time, it was reported that Angelababy went to Japan with Little Sponge alone. Netizens asked Xiaoming why he didn’t accompany his wife and son, causing marital discord speculations to spread like wildfire again. 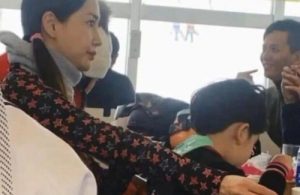 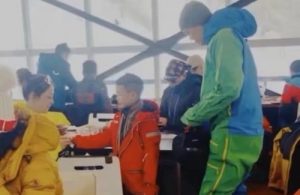 Huang Xiaoming: “I Want My Son to Be Just Like Angelababy”