Popular Mainland star Huang Xiaoming (黃曉明) and his equally famous wife Angelababy (楊穎) triggered marital discord speculations once again after they performed separately at the CCTV Mid-Autumn Festival Gala on September 13. This led many to believe the pair’s four-year marriage is on the rocks since they are rarely spotted together, and recently, they were photographed arriving at the Shanghai airport separately.

When fans saw Xiaoming riding the moving walkway at the airport, they asked him about Angelababy’s whereabouts, but he did not answer. He appeared nervous as he used his clammy hands to wipe the sweat on his forehand. In the end, he turned around without responding.

Angelababy then appeared at the airport in a cropped black tee that revealed her slim waist, a green cap, and a black mask.

Though the couple was often sighted together with their two-year-old son Little Sponge back then, they have not been seen in public together as of late, sparking frequent rumors that the two’s relationship has soured. Not only has the couple refuted past allegations, but Xiaoming even warned that his lawyer would get involved next time. Meanwhile, Angelababy said, “I will treat it as a joke and then forward it to my team.” 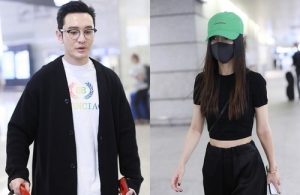