Though actress Angelababy (楊穎) and Mainland star Huang Xiaoming (黃曉明) had a grand fairytale wedding four years ago, rumors of a rocky marriage have shrouded them for the past few years. Recently, Angelababy revealed her heartfelt thoughts on a variety show hosted by Aya Liu (柳翰雅).

When they went to a restaurant to eat, the boss, who was asked for her impression of the celebrity, recognized Angelababy. The boss said, “I know her husband loves her a lot, but I don’t know if the recent rumors are true or not.”

Angelababy smiled awkwardly and expressed, “I don’t think I have done a good job in this aspect – being known for how well my husband treats me and things like that. Of course, I won’t reconcile to just being [Huang Xiaoming’s wife]!”

She continued, “I want to have a representative work that everyone can remember.”

However, she doesn’t believe viewers care about the real her, as they are only drawn in by wonderful stories and standout remarks. Angelababy said they don’t want to tune in to a boring life.

Also, the star generously shared her view on love. “Whether it is a boy who loves a girl or a girl who loves a boy, the care and love from both sides are equal. I have always felt that two people who can be together are like two puzzle pieces that fit.” 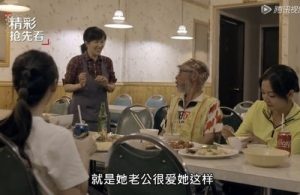