Married in 2015, Huang Xiaoming (黃曉明) has always been appreciative of his wife, Angelababy (楊穎). Aside from gifting her with luxury handbags and cars, Xiaoming also likes to verbalize his love. In a recent interview, Xiaoming spoke about Angelababy’s good qualities and hopes that their nearly two-year-old son will grow up to be like her.

Contrary to his own introverted childhood, Xiaoming admitted that his son’s personality is more outgoing like Angelababy. Xiaoming said his family didn’t intentionally raise his son a certain way to promote his extroverted personality, “He was born that way”.

Dating for six years and married for two years, Xiaoming admires Angelababy’s cheerfulness and optimism. “She’s kind-hearted, sincere, hard-working, loves to laugh, loves our family and son. I hope our son grows up to be like her.”

Fans also agree with Xiaoming’s assessment of Angelababy, whose popularity in Mainland China is largely due to her cheerful appearances in reality TV shows such as Running Man <奔跑吧！兄弟> rather than her acting skills.

While taking care of her family, the 29-year-old actress has been juggling a busy career. This may account for Angelababy’s recent weight loss. Craving a jianbing for breakfast one morning, Angelababy lined up at a street cart and appeared to be very hungry. Barefaced and wearing a cap, Angelababy dressed casually in a t-shirt and lounge pants. More surprising than her attire was that Angelababy seemed to be at her thinness ever, and was very fragile without an ounce of fat in her. 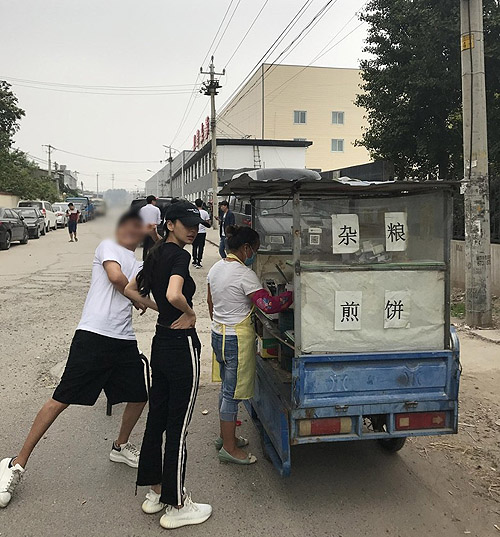