By joanna on October 9, 2015 in Celebrity Weddings, Hot Gossip!, NEWS 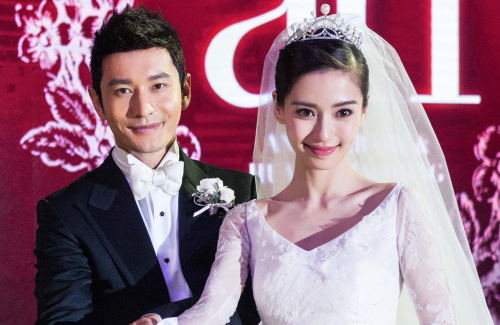 Initially dressed in traditional Chinese wedding attire, Xiaoming and Angelababy later changed into a suit and gown for the exchanging of vows. Both husband and wife teared up when Angelababy was led by her father up the aisle and to Xiaoming’s side. “I don’t know what to say, but I really want to say to you that I will always support you in this life,” Angelababy said to Xiaoming. “No matter if you’re tired or if you’ve encountered unhappy things, think about how I will always be by your side. It is my dream to build a family for you and have an extremely satisfactory life. I hope that when we get old, you will say to me that finding me was a correct and happy thing.”

Xiaoming then said, “I was actually very nervous today. I have to say, my baby, you’re done for. Just wait for the days to come. I’ve never treated anyone so well, except for my mom. All I want to do is offer all the best things in the world to you. I like everything you like, and even when we’re in our seventies and eighties and can’t walk anymore, you will still be my little princess.”

The wedding ceremony was held at the Shanghai Exhibition Center, which was transformed into what seemed like a garden castle for the event. The stage was covered in fresh flowers and trees, arranged in ways that reportedly took almost 48 hours to complete. Even the wedding cake resembled a castle tower, complete with a mini carousel.

In total, Xiaoming and Angelababy invited 527 guests to their wedding, a number chosen because they registered their marriage on May 27 and because, in Mandarin, “527” sounds similar to “I love my wife.” The guests were seated at 66 tables, though the table numbers themselves reached 80 due to the exclusion of unlucky numbers.

Making Charity a Habit Even in Marriage

Despite the exquisitely constructed garden castle and Angelababy’s gleaming diamond crown, the most impressive aspect of the ceremony was undoubtedly the gifts to charity that the couple incorporated into their wedding. The two were offered sponsorships by many big-name brands, but they rejected them all in favor of giving back to society.

After the video, five hearing-impaired children went up on stage to perform a song. These children were personally invited by Xiaoming and Angelababy to Shanghai in order to go sightseeing and perform at their wedding.

Xiaoming also announced that all of the trees that had been used to construct the garden on stage would be donated to social welfare organizations, in the hopes that they could be further used to improve the homes and environments of disabled people.

Previously, Xiaoming and Angelababy had surprised their friends and relatives with special wedding favors, which contained cookies baked by disabled people who had received vocational training at a charity organization in Nanjing. Through these wedding favors, Xiaoming and Angelababy hoped to encourage their wedding guests to support disabled people.