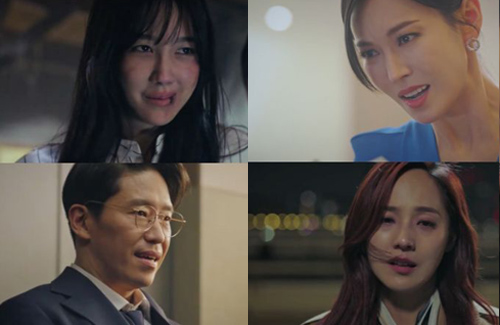 With South Korean drama The Penthouse 2 is heading to season’s finale on April 2, fans are glued to the drama’s development. The drama’s most recent episode recorded a new nationwide rating of 29.2 percent and surpassed its personal best rating 28.8 percent from the first season’s finale. Viewers cannot get enough of the drama’s intense and thrilling storyline filled with unpredictable twists.

Episode 12 revealed major plot secrets beginning with a shot of distressed Shim Su Ryeon (Lee Ji Ah) rescued in the basement of the mansion owned by Joo Dan Tae (Um Ki Joon). However, as the police arrived to assist her, Shim Su Ryeon changed her expression to a dark smirk revealing that everything went according to her plans.

Meanwhile, Oh Yoon Hee successfully extracted her revenge against Joo Dan Tae and Cheon Seo Jin, but she was kept in the dark that her daughter is alive. Overwhelmed by emotions, Oh Yoon Hee penned a letter to Shim Su Ryeon to apologize for her actions and wrote, “I will accept the punishment. Everything I have done for you is for my atonement. Goodbye.” The episode ended with a scene of Oh Yoon Hee preparing to jump over the bridge.

The Penthouse 2 finale will air next week and closes the loose ends for this season.