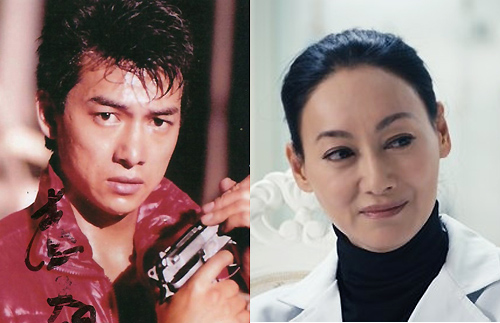 Hong Kong martial artist, Austin Wai (惠天賜) died this week in Beijing at the age of 55. His sister, Kara Hui (惠英紅) confirmed Austin’s death, shocking many the public with Austin’s sudden death. It was determined that Austin had died due to recent excessive weight loss.

It was reported that Austin has been dead in his Beijing home for several days prior to being discovered by his manager. On September 21, Austin posted on his Weibo blog that he has not been feeling well.

Grieving for her elder brother, Kara will be traveling to Beijing to take care of Austin’s funeral arrangements. This morning, Kara will first meet her sister from Hong Kong, then arrange to have Austin’s body transported back to Hong Kong. Kara took two days off from her filming, but will need to return to Hangzhou the day after tomorrow. If the mainland Chinese government insisted on cremating the body, then Kara will deliver the ash back to Hong Kong. However, the final decision will remain with Austin’s children.

As for the cause of her brother’s sudden death, Kara said it was due to excessive weight loss with over exercise, and the body failed to adapt accordingly. As Kara explained Austin’s death, Kara’s voice started to choke. She had called Austin’s manager to notify the police of his death.

“I had this uneasy feeling, so just for peace of mind, I decided to have Austin’s manager to break open his door to find out what is going on,”  Kara revealed. She received the bad news when her workday ended. Kara immediately contacted family members, relatives and friends, and asked for friends in mainland China for help.

Although Kara was scheduled to complete filming at 5 AM the next morning, it has now been cancelled and postponed. Kara arrived in Beijing at 2 PM, without an assistant and wearing plain clothing with a pair of sunglasses. As soon as she left the security area, a female chauffeur picked her up from the airport. She ran into Jacky Wu (吳京); the two shared a hug and a quick greeting and left in a hurry.

After that, Kara was taken to a government agency in the southern section of the Fifth Ring in Beijing to take care of Austin’s body. Kara’s sister and a few relatives were there waiting for a while. When all were present, the group conversed before entering the office. Smoking for thirty minutes and making small chat, Kara left.

At a press event, Michael Miu (苗僑偉) was shocked to hear of Austin Wai’s sudden death, and started reminiscing about their friendship. Michael said, “I recall when I was in The New Adventures of Chor Lau Heung <楚留香之蝙蝠傳奇>, Austin was Chung Yuen Yat Dim Hung (中原一點紅). He was like a big brother to us. We have known each other for such a long time, but it has been a while since we communicated. I am deeply shocked to hear about his passing.”

Michael continued, “He is only a few years older than me…. I have seen Austin in movies the past few years; he was pretty fit and strong. I recalled he was still exceptional in his fight scenes and no body double was needed.” Michael said that he will hold off on calling Kara for the time being, to allow the family to grieve.

Veteran actor, Damian Lau (劉松仁) was also deeply saddened by Austin’s death. Damian said, “When I was filming Luk Siu Fung <陸小鳳>, Austin played my good friend Sai Mun Chui Suet. I did not know how to fight back then, so Austin also stood in as my body double. Like a lot of ex- Shaw Brother artists who went on to work for TVB, Austin was in great condition back then. I have not run into him for a long time. Currently, I am on location filming now, and will call Kara later.”

Michell Yim (米雪) said that she has known Austin for decades, filming with him multiple times. However, Michelle has not communicated with him recently, and only followed his recent developments via Weibo. Michelle expressed her shocked at Austin’s sudden death.

It was understood that Austin Wai’s body was cremated today in Beijing, China and will be transported back to Hong Kong later.