While TVB continues to lead viewership ratings over rival station ViuTV, the latter is winning over younger viewers with its creative programming. One of ViuTV’s most high-profile projects is the remake of Japanese boys’ love (BL) drama Ossan’s Love <大叔的愛>, which will be airing June 28. TVB will counter with its flagship drama Murder Diary <刑偵日記> slated for free-to-air broadcast on the same day in Hong Kong, although the drama first premiered on June 15 on paid platforms, myTV Gold and Youku. 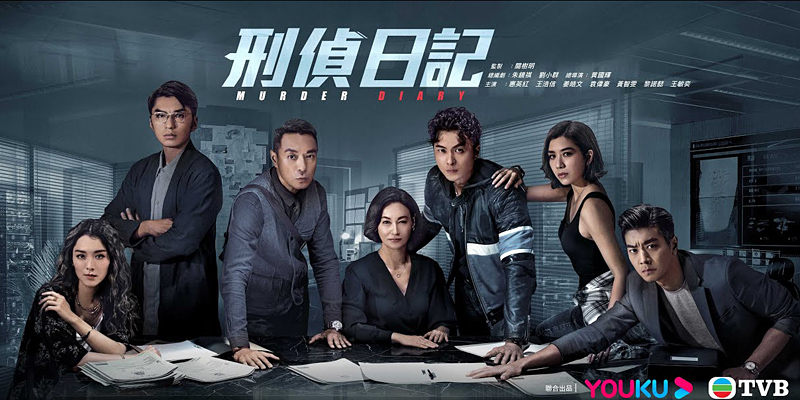 Murder Diary promises horror, suspense, and a thrilling crime storyline. Each episode is carefully crafted to include psychological suspense and surprise twists. The series will predominately be led by a team of crime investigators with expertise in four major fields: handwriting identification, bomb disposal, forensic anthropology, and criminal psychologists who are skilled in studying serial killers. To get ready for filming, the production team spent over two years gathering information and doing research on each of the departments.

However, due to a series of suspicious circumstances, King Fung becomes the primary suspect in a murder case. A victim in the case, his younger sister (Joey Thye 戴祖儀) is heavily traumatized and enters a mental hospital.

Feeling guilty for abandoning her children when they were younger and causing them psychological stress, Pik Sum attempts to get closer to them by working as a health assistant at the mental hospital where her daughter is residing.

With murder cases unsolved and the real serial killer still loose, superintendent Lip Shan (Philip Keung 姜皓文) pulls together a team of elites to investigate and tries to put an end to the unsettling killings.

Although Murder Diary will inevitably have high viewership ratings, ViuTV’s Ossan’s Love will be making history as the first boys’ love (BL) drama in Hong Kong. Ossan’s Love has already generated a lot of buzz since it stars popular boyband MIRROR members Anson Lo (盧瀚霆) and Edan Lui (呂爵安) as officemates caught in a love triangle with their boss, Kenny Wong (黃德斌).

A youth comedy, the trailer showcases classic scenes from the original Japanese version flavored with Hong Kong humor. Besides a scene where Anson corners Edan in the bathroom, the men were seen feeding each other food. In another scene, Edan accidentally loses his balance on a bus and falls onto Kenny’s shoulders, causing him to suddenly realize his romantic feelings. To express his feelings, Kenny gifted Edan with a large bouquet of red roses and proudly exclaimed, “Tin Tin, I love you!”

With Ossan’s Love becoming the first male-male romance series in Hong Kong, many look forward to the refreshing and light-hearted storyline.