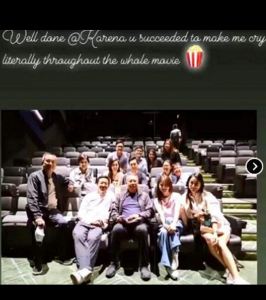 Known for romancing Raymond Lam (林峯), actress Karena Ng (吳千語) fell in love with rich 3G Brian Shi (施伯雄), grandson of Shi Ziqing (施子清), following her breakup with the singer and actor in 2018. While Karena and Brian separated briefly, they seemed to have gotten back together again and are more high-profile than ever, with Brian publicly tagging her in his recent social posts.

High-profile Gestures
Though the HK media once spilled that 28-year-old actress does not have the approval of Brian’s family, Brian’s recent move of booking an entire film theater for his relatives to watch Karena’s film together seemed to suggest otherwise.

On the eve of the premier of Sunshine of My Life <我的非凡父母>, the real estate entrepreneur held a ticket giveaway on his Weibo page where he penned a supportive message and tagged Karena. “Hope everyone can see the growth of HK media’s favorite target and appreciate her work at the same time”, he wrote. On September 16, he shared a photo of Karena and himself, along with family members such as his uncle and aunts at the local movie theater.

Surprised at their quick romantic developments, netizens commented that it would not take long for Karena’s dream of marrying rich to materialize, adding that the actress was the very picture of the “good daughter-in-law beside her future father-in-law”. Others also pointed out despite looking gorgeous onscreen, her acting needs brushing up and hopes she would not just become a tai-tai after marriage.