With the TVB Anniversary Awards taking place on January 2, 2022, Karl Ting (丁子朗) and Matthew Ho (何廣沛) are nominated for multiple awards and the tide is in their favor as heavily promoted actors at the station.

Appearing at a promotional event yesterday, both actors said they will be busy working through the Christmas holidays. 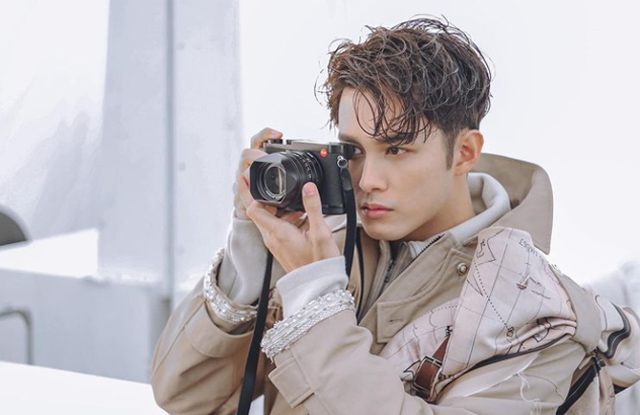 Matthew is learning sign language and how to ride a motorcycle for his new drama, which also stars Bowie Cheung (張寶兒) and Rosita Kwok (郭柏妍). “Luckily, I have my driver’s license and I know how to bike so the lessons are going smoothly. However, learning sign language is a bit difficult because my teacher is deaf-mute, and I have to work hard at understanding what he is saying while he is signing. It’s different from Hubert Wu (胡鴻鈞) whose teacher has no hearing disability, so he is able to explain the sign language on the spot. It’s been a challenge learning two new skills at once.”

Matthew praised Rosita’s acting potential, and hopes he will have good chemistry as she portrays his childhood friend/love interest in the drama.

For the upcoming Anniversary Awards, Matthew is nominated for Best Supporting Male Actor, Best Male Host, and Most Popular Onscreen Partnership this year. He joked that Oppa’s Cuisine <男神廚房> is his first time as a host, and his nomination is all due to Carol Cheng‘s (鄭裕玲) hosting skills. “I’m very happy that the show has received good response. I hope that I’ll be able to take on other hosting jobs in the future. As for awards, I’ll keep a neutral attitude.”

Karl is Favorite for Most Improved Actor

Dubbed as one of the Millenial Five Tigers, Karl is in the spotlight for numerous nominations, including: Most Improved Actor, My Favorite Male Character, Best Male Supporting Actor, Best Male Host, and Most Popular Onscreen Partnership.

He thanked TVB for their support, and joked that he has been nominated for Most Improved Actor three times but may finally have a chance because Matthew has already won the award. “I don’t dare think about the other awards, but of course I want to win Most Improved. My family has been super supportive–I wasn’t even aware when the nomination list was released, but my family told me that they have already voted for me.”

Currently filming for Legal Spokesperson <法言人>, Karl portrays a lawyer with Regina Ho (何依婷) as his love interest. Within one day, they filmed dating, breaking up, and reconciling scenes! He shared that Regina has been great to work with, “She took the initiative to talk to me so we’ve gotten close quickly, and filming is not as awkward. I’m now trying to memorize all the legal jargon. I just finished filming Forensic Heroes V <法證先鋒V > which also had a lot of industry jargon, so I’m mixing them up a bit. The crew also found real animal specimens for filming which was a bit scary!”