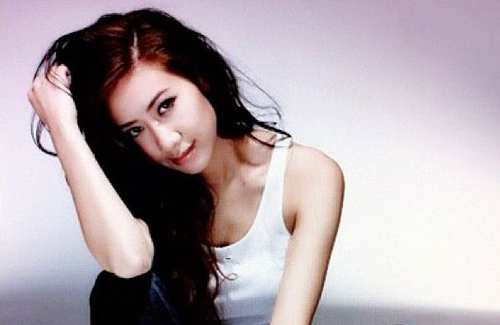 Ever since news broke that heartthrob Shawn Yue (余文樂) has been secretly dating Kary Ng (吳雨霏), the media has been relentless in pursuing the truth behind the rumors, so much so that some reporters even flew into London to catch them “in action” while others waited like hawks at the Hong Kong International Airport for their return.

Shawn and Kary have been together for 3 months. News of their relationship broke when the couple went on a 10-day trip to the United Kingdom and Switzerland last week.

Reporters from Oriental Daily were on a mission when they went to London – they gathered information of the couple’s departure flight out of London and flew into Heathrow Airport to get first hand information about Shawn and Kary’s vacation as well as snap photos of them together.

To avert the paparazzi, the couple only reached the airport 15 minutes before the check-in counters closed. The observant reporters noticed that the 2 celebrities had a pair of similar luggage despite the difference in colors. With 8 bags between the both of them, it was no wonder that Kary had difficulty with her bags and Shawn had to step in to help push her trolley. When Shawn caught sight of the reporters, he smiled feebly before proceeding to the security checkpoint with Kary following closely behind.

Back in Hong Kong yesterday, more reporters were waiting for the couple. Getting out of the plane separately, Shawn appeared first at the arrival hall. Despite the long haul flight, Shawn appeared to be in a good mood and smiled broadly. However, he told the reporters that he was tired and was not prepared to be interviewed.

When the reporters pressed on, asking if Shawn had played too much, resulting in his tiredness, Shawn replied, “Of course, I would play a lot when travelling!” After that, Shawn asked the media to respect him and give him personal space as he has no wish to talk about his personal affairs but would like to focus on his career instead.

Even when reporters tried to provoke him by asking if he knew that Kary is now with him because she did not manage to woo Pakho Chau (周柏豪), Shawn said, “I’m more handsome than Pakho!”A while later, Shawn uploaded a photo of his mother on Instagram with the message, “The first thing I want to do after coming home to Hong Kong is to eat my mother’s cooking.”

Ten minutes after Shawn came out of the arrival gate, Kary emerged through a different gate. Mobbed by more than 30 reporters, Kary was even hurt on the head in the process of walking away from them. When she was asked if she was dating Shawn, Kary evaded the question and just said, “I’m surprised you all came to welcome me home!”

Did Kary and Shawn share the same hotel room? Shocked by the question, Kary was speechless momentarily and then smiled, “Let’s go; let’s go!”

Using the same questioning tactics they had used on Shawn, the media asked Kary if she had gotten together with Shawn because Pakho rejected her. Kary replied that both men are handsome and quickly walked away with 3 of the staff from her recording company.