Kate Tsui and Tavia Yeung Face Off in Concert 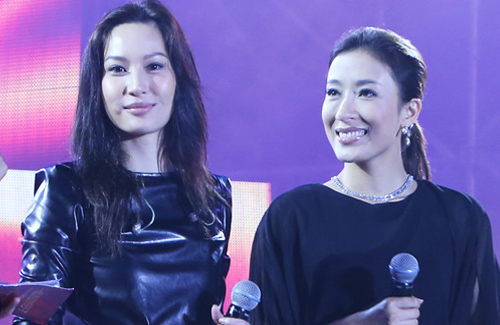 Fierce competitors in this year’s TV Queen race, Kate Tsui (徐子珊) and Tavia Yeung (楊怡), had an early face off in a concert in Dongguan on Sunday, November 25. With Kate’s recent popularity rising, she pocketed $400,000 RMB for the stage performance. According to Face Magazine, Tavia reduced her price and made a “surprise” appearance for $200,000 RMB.

An inside source revealed that Tavia had originally asked for $400,000 RMB, but the show’s organizers were unwilling to pay the price. Finally, Tavia reduced her price and agreed to appear for $200,000 RMB. Due to the last-minute change, Tavia’s photo was unable to be added to the concert poster in time, thus surprising audiences with her appearance.

It was also rumored that Tavia’s popularity had declined since her “car-shaking” incident with Him Law (羅仲謙) in September. Tavia’s performance in Silver Spoon, Sterling Shackles <名媛望族> was also overshadowed by Damian Lau (劉松仁) and Elena Kong (江美儀). With the drama’s ratings averaging 28 to 29 points, Tavia’s chances for TV Queen have declined.

It was speculated that Tavia knew beforehand the TV Queen award has slipped out of her hands, leading to her absence at the Anniversary Gala on November 19.  Although Tavia said that she could not attend the Gala due to her leg injury, she has attended several promotional events while limping.

With The Hippocratic Crush 2 <On Call 36小時 II> set to film in early 2013, TVB will allegedly broadcast the drama during the Anniversary time frame, allowing Tavia to win TV Queen next year.

Although Face Magazine presented Tavia and Kate as bitter rivals, the pair denied the rumors. Tavia and Kate even pursed their lips and pretended to kiss each other on stage. Backstage, Tavia and Kate held hands while taking photos and chatted together frequently.

Regarding the leaked list of TVB Anniversary Award winners that claimed Kate will win the TV Queen and My Favorite Female Character awards, both Kate and Tavia said the news was not trustworthy and only based on the press’ imagination. Pointing out that the TV Queen will be selected through audience votes, it was impossible to know who will be the winner in advance.

Kate emphasized that she did not have any rivalry with Tavia. Kate said, “Tavia is my senior at work; I greatly admire her. She acted very well in Silver Spoon, Sterling Shackles. I am very happy to be nominated along with Tavia.” Since another actress may end up winning the TV Queen award, Kate did not give herself too much stress, only thanking her supporters and colleagues’ acknowledgement of her work.

Tavia also praised Kate fore being a hard working artist and wished her luck in winning an award.