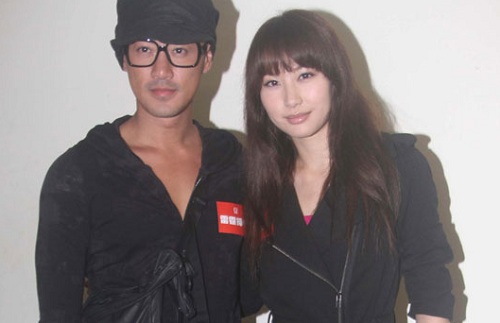 The praying ceremony for TVB drama, Fight Crime <雷霆掃毒>, took place yesterday. At the event, “singles,” Kate Tsui (徐子珊) and Raymond Lam (林峰) were asked what qualities they looked for in a significant other. Kate answered, “I like a man who makes more money than me!” Raymond said that he preferred a professional woman who worked outside the entertainment industry.

Although Kate was spotted taking Latin dancing lessons with TVB colleague, Sammy Shum (沈震軒) last November, no further relationship developments have been reported since. It was unclear whether the duo were only friends who possessed a mutual passion in dancing, or whether romantic ties truly existed.

Filming day and night for Fight Crime and lacking proper rest, Kate Tsui’s face was a bit swollen yesterday. In the past, Kate’s sister and friends introduced men to her. Kate was practical and clear on what she looked for in a significant other. She preferred a man who had a good personality, was taller than her, and made more money than her. Similiar to many women, Kate preferred a man who can take care of her.

When it was pointed out that Raymond Lam met her criteria for a significant other, Kate laughed, “I’m not suitable for him! He is my big brother! We do not have sparks for a romantic relationship!”

Portraying an explosive cop in Fight Crime, Raymond Lam appeared with a rough stubble on his face. Public interest regarding the type of woman that attracted Raymond remained intense. Raymond admitted that he possessed good feelings towards Linda Chung (鍾嘉欣) while filming Heart of Greed <溏心風暴> and Moonlight Resonance <溏心風暴之家好月圓>. Raymond expressed his eagerness to work with Linda once again. However, Linda was currently rumored to have been dating martial arts star, Philip Ng (伍允龍), for the last 5 years, dashing fans’ hopes that Raymond and Linda may turn their former onscreen chemistry into a real-life dating relationship.

Since breaking up with Mavis Pan (潘霜霜) last year, Raymond Lam professed to be single for more than a year. With his busy schedule–even bringing upon nerve damage and extreme back pain to himself–Raymond said that he did not have time to even go on dinner dates. Due to his back injury, he lost more than 10 pounds in weight.

Raymond stated that he wished to date a woman who worked outside the entertainment industry. “I am always filming. I hope to find a significant other who can teach me professional knowledge from another field.” Raymond dismissed the suggestion that such criteria arose from the backlash that resulted from his high-profile bed photos with Mavis Pan.

Jayne: I am very curious to find out whether Kate and Sammy Shum are indeed dating. Since their dancing photos last November, there has been no follow-up. Wonder if they were told to be more low-profile by TVB since?