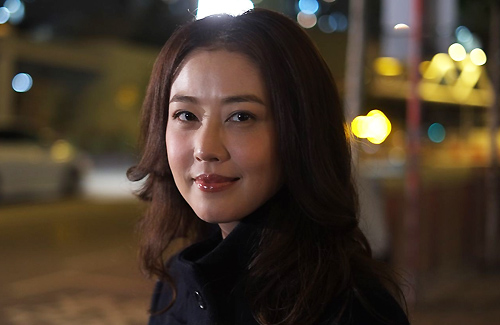 Kathy Chow (周海媚) has been a busy actress working in Hong Kong, mainland China, and Taiwan since the 1990s. After finding herself a romantic partner in 2003, she settled in Beijing to focus on her work. Although Kathy possesses a stable relationship and career, she admits her life is not that exciting. “In the hearts of the audience, artists seem to live a very colorful life. But actually, my life is nowhere near colorful. In fact, it’s been very bland.” Nonetheless, Kathy is an optimistic woman who prefers to take steps forward and continue her learning process throughout life.

Kathy portrays an insurance agent in the currently broadcast TVB drama, Sniper Standoff <神鎗狙擊>. She admitted she felt slightly upset when the drama initially began filming. “When I heard it’s going to be a police drama, I thought they were going to ask me to be a policewoman. I really wanted to be a madam, so I’m a little disappointed! I want to portray someone who is tough. I can be very cool if I try, especially when I’m not smiling.”

Having been in a relationship for ten years with her boyfriend, Kathy still has no plans of marriage. “I don’t think there is the need. It’s not like we want to have a baby. Everything is fine as long as it’s stable. There’s no need to do so many things. Plus, I’m a very busy person. Why should I marry when there is no reason to? We’ll go with the flow!”

Has Kathy’s boyfriend ever proposed marriage? “Yes, at first, but I kept rejecting the idea. He doesn’t mention it anymore. I think in many people’s lives, there are a few very important things that they must do, such as marrying and having kids. But that’s not what’s important in my life. I want to pursue my dreams, and establish my own career. I want to continue trying out new things, such as being a part of the production crew and finding good scripts.”

Another reason as to why Kathy is not interested in marriage may be because she has worn too many wedding dresses in her dramas. “There was a time when I had to wear a wedding dress every day while filming. I’ve never exactly counted, but it should be around ten to twenty times! Now I lack the feeling of interest and joy. TVB has crushed my dreams of wearing a wedding dress!”

Kathy recalled the time when she was filming in Taiwan and was experiencing relationship problems. “I felt painful every day. Once, I was having a discussion with a Taiwanese senior, and I told him I felt like I was dead. To my surprise, he told me that I am dead for the majority of my life anyway! After I heard his words, I felt more lost. I thought about what he said thoroughly. It’s impossible to have so much excitement in life every day. It only happens in the lives of the characters I portray. When I act out a role, I know I won’t experience the same thing in real life, so that’s why acting is a lot of fun. Everyone experiences different stages in life, why do some people think it’s very hard? Because they give themselves too much pressure and go overboard. I leave things up to fate and maintain my optimism. It’s okay if I fail to do something, because there will be another chance. I’m really good at comforting myself.”

Kathy also believes that it is important to continue to strive forward in life. She does not allow herself to remain at a standstill and possesses a thirst to continue to learn and improve herself. She sets her target towards establishing her own production studio on day. “It’s important to continue to work and refresh yourself, then life will be fun. Although I’ve been working as an actress for two decades, I don’t know everything. Things continually progress over different eras. If you are always standing still, then slowly you will become incompatible with others.”