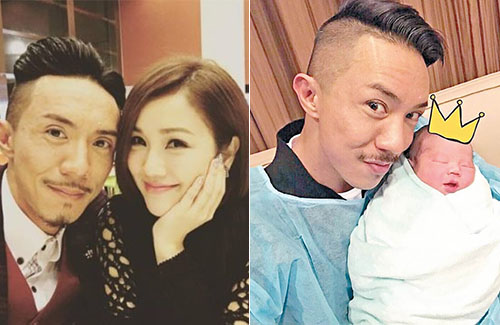 Louis delivered the news himself when he greeted the press at the hospital entrance yesterday afternoon. He also passed out goodie bags, thanking them for their support.

“Thank you for everyone’s concerns,” said Louis. “It felt like a new experience to me. My son was delivered naturally. I remember when my son was being delivered I was so nervous I felt drunk. I just kept saying thank you to everyone. It was a mess!” Louis said he learned his lesson this time, and sat further away so he won’t bump into the medical equipments.

“My wife and daughter were very good. I heard my daughter’s cries almost immediately.”

Louis then recalled the time when he tried to cut James’ umbilical cord, an experience that nearly caused his heart to jump out of his chest. “I don’t know how William So (蘇永康) did it. He cut the cord with one snip. It’s actually very thick! Took me three times!”

Karina’s birth was also an awkward experience for Louis, who had to tell jokes to lighten up the stressful atmosphere. “The doctor told me to tell more jokes so my wife could relax some more. I really don’t know what to say, so I just kept saying ‘add oil’ like we were at an athletic meet in primary school!”

Louis said his heart ached as he watched Kay’s struggle on the delivery bed. “Women are so admirable. My wife is very admirable. I honestly think two is enough. Unless science discovers a way for men to be surrogates. If that happens, I’ll deliver our third.”

On why the couple named their daughter Karina, Louis said the name came from a dream Kay had when she was only a few months pregnant, before they knew the sex of their baby. “She had a dream where she met a little girl who wanted to be called Karina,” said Louis. “She wanted to share the same ‘Ka’ letters like her mother.”

In regards to the rumors saying that Kay would get a tubectomy, Louis said, “We never had plans for that, but we do think two kids are enough.” (Will Kay make a comeback in the industry soon?) “Seeing how happy she looked when she’s with our daughter, don’t expect her to come back in the next one to two years. We all miss her, but she’s not thinking about work at the moment.”