Kelly Chen’s Sons are Growing Up! 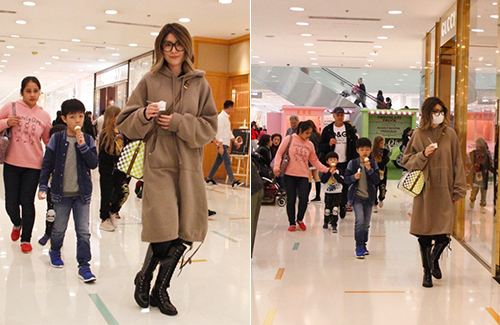 On Human Day, the seventh day of the Lunar New Year, Kelly Chen (陳慧琳) was seen taking her two sons, 7-year-old Chace and 4-year-old Riley, to go shoe shopping in Tsim Sha Tsui. Kelly wore a face mask for added privacy, but upon seeing the reporters, she took it off and walked slower, allowing reporters to take photos. Kelly’s husband, Alex Lau (劉建浩), was not with them.

Asking if they were shopping, Kelly said, “I want to buy new shoes for [my sons]. They’re feet are getting bigger!” A reporter pointed out that buying new shoes during the Lunar New Year is not very lucky, to which Kelly responded, “Really? Good thing I didn’t buy it!”

Chace and Ryan, who were both eating ice cream, waved at the reporters as they walked off. Turning 8 years old in July, Chace is very handsome and quite tall for his age, just like his father!

In related news, another celebrity mom, Cecilia Cheung (張栢芝), took her two sons Lucas and Quintus to Disneyland on Human Day. Tourists swarmed around Cecilia and her two sons as they walked around the park, but that didn’t seem to have affected her mood at all. The family did not leave the park until nightfall, after they enjoyed fireworks.