Since filming TVB drama Born Rich <富貴門>, Kenix Kwok (郭可盈) retired from the entertainment industry and has focused solely on raising her daughter, Tania Lam (林天若). Kenix has steered clear from the public eye, but her husband, Frankie Lam (林文龍), has continued to film television series and movies.

With a wave of established artistes reemerging in Hong Kong dramas recently, is Kenix interested in making a comeback too? To the dismay of many fans, Kenix has her heart set on spending time at home to raise her daughter. When asked whether she has any withdrawals from acting, Kenix said, “I have more of an addiction to watch television! While taking care of my daughter, I have learned a lot of things that I could not have while filming.”

Enjoying time spent with seven-year-old Tania, Kenix said, “I have a very well-established relationship with my daughter. She is used to talking to me; we talk about everything. In the future, we won’t have any barriers.”

Although she does not intend on returning to the small screen, Kenix admitted that she was approached on several occasions with filming projects. “But I would have to sacrifice spending time with my daughter. This time period [of growing up] is very precious.” When asked whether Frankie is opposed to her acting again, Kenix said, “He also agrees that having both parents raising a child will foster more love and open communication. It’s different when you have another caretaker.”

With such an undeterred focus on raising her child, do Kenix and Frankie plan to have another child? Kenix said, “We originally wanted to have more children, but we did not deliberately plan it. It has been so long now. We don’t want the age difference with my daughter to be so drastic. It is up to fate. We will not intentionally have more children.”

Frankie promises to use his 30 years experience in television to make ATV programs amazing. 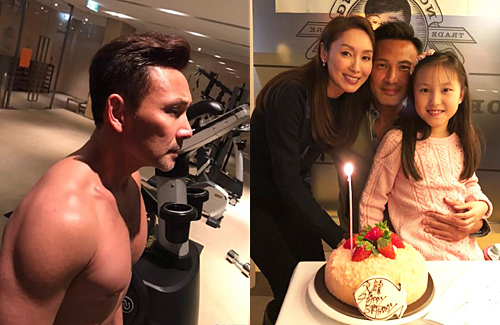 Frankie Lam has been diligently training every day at the gym for two months.