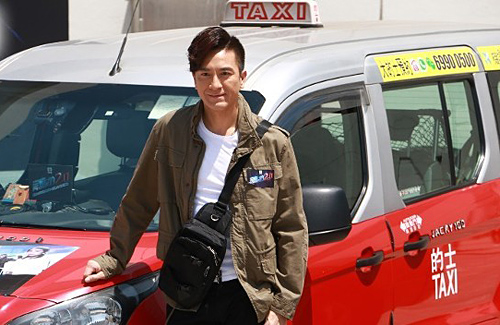 Kenneth Ma (馬國明), Mandy Wong (黃智雯), Zoie Tam (譚凱琪), and Hubert Wu (胡鴻鈞) appeared today at a promotional event for their upcoming drama, The Exorcist’s Meter 2.0 <降魔的 2.0>, which will be airing in May. Kenneth joked that this is probably the drama where he will have the most luck with women since The Mysteries of Love <談情說案>, in which he was a playboy.

In The Exorcist’s Meter 2.0, Kenneth will have relationships with Mandy, Zoe, and Moon Lau (劉佩玥). He also hopes that fans can watch the first installment again to refresh their memories as the sequel picks up right where it was left off. There will also be some unresolved storylines, leaving room for a third installment if the ratings are good.

Ashley Chu (朱智賢) and Jackson Lai’s (黎振燁) scandal is still fresh on everyone’s minds, and many are seeing Ashley’s boyfriend Brian Tse (謝東閔) as “Kenneth Ma 2.0” due to his forgiveness over her cheating.  Experiencing betrayal in a relationship before as well,  Kenneth was asked to comment and he stated, “I’ve been busy with filming lately, but I do know what happened. Since the parties involved have not given explanations yet, I’m not going to comment on others’ business.”

Reporters asked if Kenneth had any tips for Brian in regards to handling the situation, and he commented, “I’ve worked with Brian many times. My impression is that he is a very positive person, so there shouldn’t be any issues. Relationship issues should be left to the parties involved.”

Asked whether he had recovered from Jacqueline Wong’s (黃心穎) scandal, Kenneth commented that it has been a long time and that no one should continue to be blamed. In regards to dating, he would like to leave it up to fate. “If you see me eating dinner with females, please don’t be surprised! My friends have mentioned introducing me to new female friends, but I feel awkward so I’m not too keen on it.”