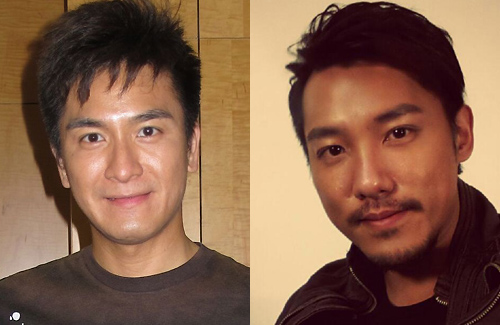 Yet to fulfill his dreams of marriage and children, Kenneth Ma (馬國明) is instead directing his fatherly love towards good friend Jonathan Cheung’s (張頴康) baby. The two men, along with Jonathan’s pregnant wife Angie Mak (麥雅緻), were seen shopping for baby goods recently. Unable to contain his excitement, Kenneth volunteered himself as godfather and paid for an expensive gift out of his own pocket.

Kenneth and Jonathan became close friends after working together on 2012’s Three Kingdoms RPG <回到三國>. That same year, Jonathan married Angie, a former Miss Hong Kong contestant and variety program host at TVB. In January this year, the happy couple announced that they are expecting their first child this summer.

Finally finding some free time, Kenneth met up with his friends to pick out a gift for the baby. Laughing the whole way, the friends discussed several choices and eventually settled on a wireless baby monitor that Kenneth happily shelled out $2,000 HKD for. Although he is interested in becoming a godfather, Kenneth is also concerned that he will be too busy to make the commitment. “Becoming a godfather is not really that simple. I’m worried that we will be too busy and won’t be able to meet each other even for just once a year.”

Despite this, Jonathan welcomes the idea and joked that he will be able to save a lot on baby expenses if Kenneth is willing to help out. Since the child will not be born until June, the two decided that it would be best to discuss the matter later. Godfather or not, Kenneth is happy for the couple and is very proud of his thoughtful gift. “I know that they must be very nervous, being first-time parents, so I know they will definitely use this webcam to constantly monitor the baby. Hey… I can also watch along when I have time, haha!”