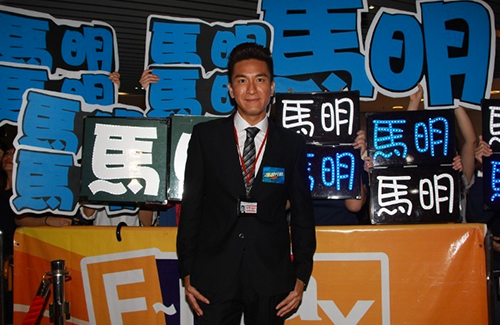 Actors Kenneth Ma (馬國明), Ruco Chan (陳展鵬), and 2015 Miss Hong Kong second runner-up Karmen Kwok (郭嘉文) is currently promoting their upcoming television drama ICAC Investigators 2016 <廉政行動2016>, which premieres on Saturday, April 23. Currently busy with their own projects, Kenneth and Ruco said they have to take time off their own filming schedules to promote the series.

Kenneth is currently shooting Wong Jing’s (王晶) new TVB drama Casino Heroes <賭城群英會> in Shenzhen. Time is tight for the crew; Kenneth said they were only given about two and a half months to complete 35 episodes. The cast also lived about an hour and a half away from their filming location. Kennth said, “We all had to wake up early to get ready every single day. It’s not as comfortable as I thought it would be.”

Also starring in Casino Heroes is veteran actor Patrick Tse (謝賢) and TV Queen winner Charmaine Sheh (佘詩曼). Kenneth revealed that he will eventually have scenes with Patrick, but as of now the team wants to focus on his scenes with Charmaine Sheh, Raymond Wong (黃浩然), Dominic Ho (何浩文), and Nat Chan (陳百祥) first.

Kenneth shared, “Charmaine and I will have a romantic storyline. I’ll definitely fight for more opportunities to have scenes with her,” he said with a laugh. “We collaborated in two projects before, but our stories were very short. Now, we’ve already gotten to the point where I’m starting to fall for her in the show. We haven’t filmed the intimate scenes yet, but I’m looking forward to them.”

ICAC Investigators 2016 is Karmen Kwok’s debut television drama. The 23-year-old said she is both thrilled and nervous about the upcoming release of the series.

On the show, Karmen plays an assistant investigator for the ICAC, and has many scenes with her superior, played by Ruco Chan. She said Ruco has helped her ease into her role and gave her many advice, sharing, “There was one scene where he splashes coffee on me. Before we shot it he helped me relax. We finished the scene in only two takes.”

The MHK winner, who signed a lengthy management contract with TVB, was then asked if she plans on shooting new TVB dramas soon. She shared, “Right now I’m hosting Scoop <東張西望>. After ICAC Investigators is out I hope I’ll get to have more opportunities to try different things.”