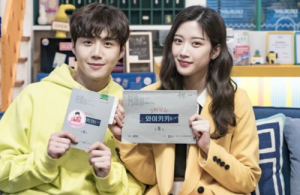 The upcoming South Korean fantasy romance drama, Link: Eat, Love and Die, immediately drew attention after rising stars Kim Seon Ho and Moon Ga Young received offers to star as a couple. They previously collaborated on Eulachacha Waikiki 2 before, so many fans are hoping to see their on-screen chemistry once more.

Link: Eat, Love, and Die tells the mysterious love story between two strangers: Michelin star chef Eun Gye Hoon and a woman who has no luck when it comes to men, Noh Da Hyun. Their journey begins when Gye Hoon opens a restaurant in a rundown town where his twin sister went missing 20 years ago. During this hectic time, he starts to feel random emotions, laughing and crying without reason. It turns out that he is sharing the same emotional journey of joy, sorrow, and anger with Da Hyun, a woman he does not know. They eventually grow feelings of love and attachment for each other.

If Seon Ho accepts the invitation to portray Gye Hoon, he will have the chance to showcase an array of emotions to the audience. On top of displaying a woman’s emotions, he also has to bring forth the shock that comes with his long-lost sister returning. Meanwhile, Ga Young will be challenged with playing a character who discovers a man is experiencing her emotions without permission.

On top of the excitement with the potential casting, fans are also anticipating a high production quality and animated storytelling, as scriptwriter Kwon Ki-Young and director No Sang Hoon have been confirmed to helm the show. They both worked on the well-written and thought-provoking mystery series Hello Monster in 2015.

The tvN drama is slated for a late August broadcast.