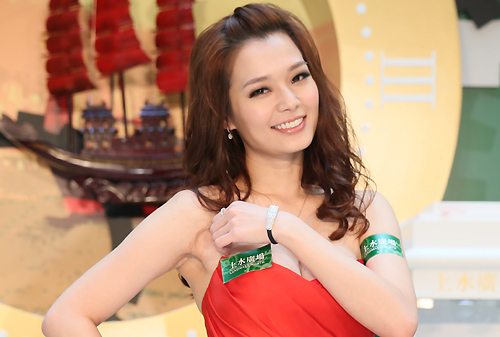 Rumors say that TVB artist Koni Lui (呂慧儀) and her husband of two years, Dickson Wong(黃文迪), have been trying for a baby for months. It turns out that these rumors may not be unfounded after all.

Recently, Koni and Dickson tossed out messages which hinted at Koni’s pregnancy. On March 23, Dickson uploaded a photo of his two cats on his Weibo and added captions to his two pets, which exchanged the following conversation – “Fat Lion: ‘Dai Lo, I am also going to be a Dai Lo soon!’ Flying Tiger: ‘Who told you that?’ Fat Lion: ‘I eavesdropped on Dad and he said it. Don’t think it’s fake?’ Flying Tiger: ‘Use your brain, fatty! It’s another master!’”

Koni shared a media’s report on her pregnancy on her Weibo blog, and responded with a simple message, “Thank you for everyone’s concerns.”

As the first trimester is the most unstable, there is a well-known superstition that a family should stay hush about the pregnancy until after three months have passed. Perhaps this is the reason why Koni refused to give a direct response about her pregnancy.

Nonetheless, it seems likely that Koni is indeed having a baby. She was recently spotted out at night in Central having a late dinner with friends, and Koni, who has always been a good drinker and is often seen wearing heels, did not drink and wore flats that night. A few hours later, Dickson arrived to take Koni home. She was wearing a thick jacket, and reports say that her bust size also increased.

In a phone interview, Koni replied with a laugh, “Thank you for your concerns! I will announce the happy news when it comes.” When is the news coming exactly? “Soon! In April! My husband also said my figure is looking better!”

Koni pointed out that she always wanted to have a baby since she first married Dickson two years ago. Now that there is a break in her work schedule, Koni has the time to rest, exercise, massage, and have check-ups with traditional Chinese physicians.

She also added that Dickson has quit smoking. Asked if she prefers her first born to be a boy or a girl, Koni said, “Girl, so I can dress her up! But I’m fine with a boy too.”