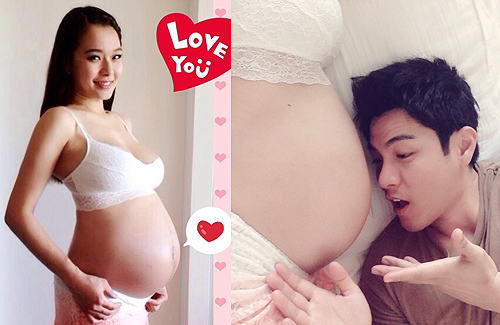 With their baby due next month, Koni and her husband Dickson Wong (黃文迪) are growing more and more excited by the day. Yesterday, the mother-to-be shared some of her pregnancy photos on Weibo, expressing that she must leave some photos for memories. One of her photos showed a humorous-looking Dickson talking to Koni’s belly.

“Who knew that besides your legs, you could also use ’44-inch’ to describe your waist? Having rested for a few months, with good food and good company, I have unknowingly developed a 44-inch waist to match my [long] ‘crab’ legs. It’s hard to come by! I must cherish this memory so I took photos of my round body. Thank you Mr. Crab for taking time off to be by my side! The father and son have been chatting a lot!”

Koni earned her nickname ‘Long Leg Crab’ after her role in 2008’s Catch Me Now <原來愛上賊>. Koni and Dickson, a 2008 Mr. Hong Kong participant, dated for 10 years before they finally tied the knot in December 2011. Since getting married, the couple has wished to become parents. Koni confirmed her pregnancy in April 2014.

Koni’s last TVB production before her hiatus was Lady Sour <醋娘子>, which completed filming in January 2014.