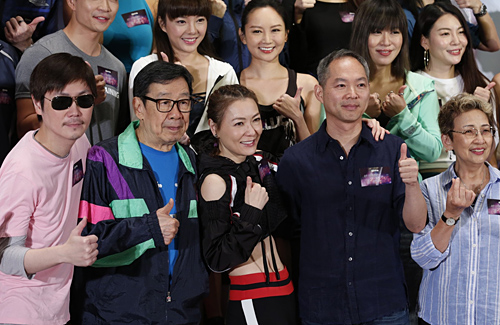 The drama follows the up-and-downs of Kristal Tin‘s (田蕊妮) character. She marries Raymond Cho’s (曹永廉) character at age 19 with her sister’s daughter in tow. Her life revolves around her family, but after 20 years of marriage she finds out that her husband is in love with another woman. She files for divorce, loses her job, and her daughter leaves her. Her life falls apart and the story follows her inspirational journey to find herself again.

Kristal exclaimed that the character’s personality is quite similar to herself. She had a lot of fun filming with Raymond as he is very humorous behind the scenes.

This is Kristal’s first drama in two years. Her previous drama was My Ages Apart <誇世代> in 2017. She took a short break to focus on recording her music album. Now that she is done with her album, she is ready to focus on acting again. “I was worried that I wouldn’t be able to adjust to the change. After my first day back, I realized that I have 20 plus years of acting experience so I am able to quickly adapt.”

Working out three to four times a week in preparation for her concert on September 20, Kristal has also been adhering to a strict diet with little oil, little salt, and overall healthy choices. “I want to be able to show the best side of myself whether it be my physique or my fitness levels.”