Married for seven years, actor Lai Lok Yi (黎諾懿) and his wife Nicole Li (李潔瑩) are welcoming their second child! The couple already knows the gender of the baby, but wants to keep it a secret for now until the gender reveal party. 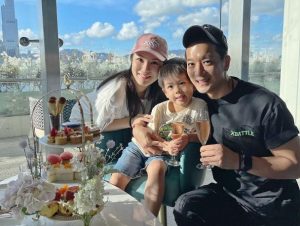 Asked if their 4-year-old son is prepared to be a big brother yet, Lok Yi replied, “We’ll prepare him psychologically when my wife’s belly grows bigger. I hope he’ll love his younger sibling. Before, we used to always ask whether he prefers a sister or brother. We asked him so many times, it’s as if we were playing him.”

Whether the baby is a boy or girl, Lok Yi thinks having two children are enough. “It’s not because of money. It’s because of [the time] needed to teach them. Two children are perfect–it’s easier to watch and accompany them. For example, when I’m off now and need to watch my son, I’m even busier than when I have to go to work.”

Building a family together requires trust. Since Lok Yi is an actor, he may be faced with greater temptations at work than the average man, but he insists, “I’ve been in the industry for over 17 years.  It’s not worth throwing away 17 years of hard work for a simple temptation. Goofing around is for young people – not for those with families. I hand over my entire paycheck – that way, I’ll have no extra money to goof off with.” He does not even feel the need to purposely tell Nicole about upcoming kiss scenes with actresses anymore.

As there is a big crew working with Lok Yi during film, Nicole feels assured as there are always people around to keep an eye on him. Confident in her husband, Nicole does not check his phone either despite having the passcode.

While every single woman dreams about having romantic dates, Nicole is rather lazy to plan them as a busy mother. “I have lower standards–the most romantic thing I can think of is going on vacation.”

Admitting he is not very romantic, Lok Yi laughed, “We’ve known each other for nine years already – our love hasn’t changed a lot. That’s why I suggest to the men – don’t start off being super romantic. It’ll be better if you don’t do so much.”