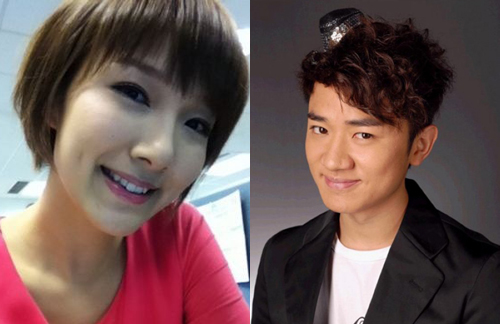 Despite their height difference, Leanne Li (李亞男) and Wong Cho Lam’s (王祖藍) love relationship have withstood the test of public exposure. Dating since 2009, the two devoted Christians had vowed to abstain from sex before marriage.

However, Leanne and Cho Lam are reportedly trying out “married life” by living together. The couple has been seen living together at Cho Lam’s house in Sai Kung and Leanne’s apartment in Cheung Kwan O. This could be a hint that marriage may come soon.

As devoted Christians, Leanne and Cho Lam had proclaimed that they are practicing abstinence before marriage. Cho Lam declared, “I cannot accept any pre marital sex! When we date, we spend a lot of time at our fellow Christian’s homes. Even at each others’ homes, we always make sure our families or Christian fellowships are around.”

Cho Lam and Leanne already received consent from their respective parents, so marriage will definitely be on their next page of life. According to one of their Christian friends, Cho Lam and Leanne have been planning for the future soon after they started dating. They have been working very hard to support their goal, both financially and spiritually. They have even consulted a pastor for opinions, who reminded them of the need to compromise and understand each other.

A Man with Two Homes

Allegedly the two lovebirds have been living together for three months already. To avoid the paparazzi, Leanne and Cho Lam have been switching between homes frequently, moving from Cho Lam’s place to Leanne’s apartment and vice versa.

Cho Lam’s workload has been intense lately and he has spent most of his time at TVB City in Clear Water Bay. To maximize his time spent with Leanne, Cho Lam would leave for work together, and drop Leanne off for a taxi somewhere. Cho Lam would work until dawn, and then head to Leanne’s apartment, spend the day there and then return to his shooting schedule afterwards. According to the security guard at Leanne’s apartment building, Cho Lam would come in either late at night or early in the morning. He has access to all the building entrances. However, he often looked exhausted and he seldom greeted the apartment security guards.

A while ago, another devoted Christian couple, Athena Chu (朱茵) and musician Paul Wong (黃貫中), announced during one of Paul’s concert that Athena was three months pregnant, and that they plan to get married at the end of this year. Athena and Paul originally practiced abstinence before marriage.

Lately, Leanne and Cho Lam’s cohabitation may be a sign that the couple’s attitude towards abstinence may have wavered. However, Leanne stated she is looking forward to getting pregnant after marriage.

47 comments to Leanne Li and Wong Cho Lam Living Together?