Leanne Li Not Worried About Wong Cho-lam Cheating: “The Media Will Look After Him” 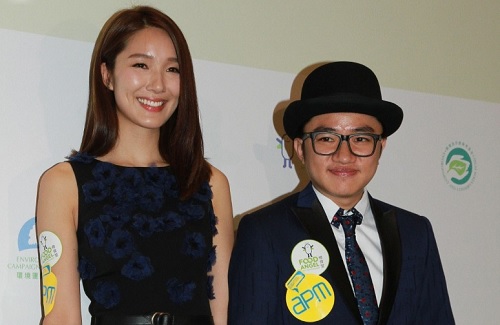 Last week, artists Wong Cho-lam (王祖藍), Leanne Li (李亞男), and Mag Lam (林欣彤) attended a promotional event at a mall in Kwun Tong. Cho-lam is currently busy with the launch of his own studio agency, which also manages Leanne and Mag. Cho-lam revealed that his studio will be signing about eight to ten artists from both Hong Kong and Mainland China.

Cho-lam said he did not have to invest a lot of money on the studio, as it is co-produced by his lead agency, Shaw Brothers. Although no longer managed by TVB, Cho-lam said he will continue to work closely with his “mother station”, and shared that he has begun work on Inbound Troubles 3 <老表3>.

In regards to the rumors that Cho-lam will return to TVB to host the next series of Super Trio <獎門人>, Cho-lam said, “When the mother station tells me to go back, I will go back.”

His wife Leanne, who is the first artist to sign under Cho-lam’s new studio, denied receiving special status. She said, “He’s very fair to all of his staff and artists.” Cho-lam jokingly added, “Be careful of what you say! Or I’ll freeze you!”

Christine Ng’s (伍詠薇) husband, Kasey Lin (練海棠), is bombarded with cheating rumors after he was spotted spending a few hours with a woman in a car. Asking if Leanne would keep her eyes on Cho-lam, she said with a laugh, “I have many informants. If he does betray me, I will force him to kneel on broken glass and durian.” Has Cho-lam already suffered such punishment? “No yet, and I hope he won’t! But we are very fortunate. I trust the media will look after him for me, so I’m not worried.”

8 comments to Leanne Li Not Worried About Wong Cho-lam Cheating: “The Media Will Look After Him”