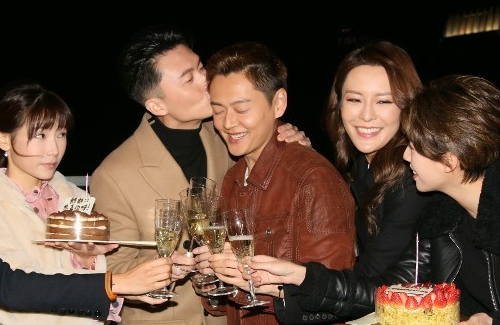 After jointly winning Most Improved at the 2019 TVB Anniversary Awards, Owen Cheung (張振朗) and Kelly Cheung (張曦雯) went straight back to work for their new TVB drama Legal Mavericks 2 <踩過界II>. And while they had no time for a formal celebration, their cast mates did manage to successfully surprise them with quick gifts.

Arriving to work the next day, their Legal Mavericks 2 costars Vincent Wong (王浩信) and Sisley Choi (蔡思貝) immediately surprised them with some cake and champagne. Vincent congratulated Owen with a kiss on the head, and Sisley pecked Kelly on the cheek.

“Sisley came up with this idea,” said Vincent. “I hope our new drama will also ‘improve’ in ratings!” 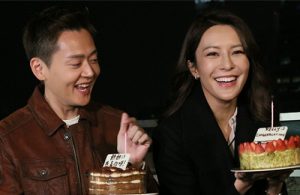 After the awards ceremony, Owen went back home to eat a quick dinner with family. Asking if his girlfriend had congratulated him, he said, “Yes. There was no celebration, but seeing so many cast mates and friends hugging me backstage and congratulating me, I already felt respected and touched. That’s already a celebration in my eyes.”

It was a 13-hour day on their first day back to work. “Winning Most Improved Actor motivates me,” said Owen. “I have to work even harder going forward.”

Kelly echoed Oscar’s sentiment, saying, “It’s definitely very encouraging. I’m thankful for the opportunity of coming across a good script and a good character. It drives me to work harder. I don’t want to disappoint!”

While Kelly also didn’t have time to celebrate her win, she did manage to crab something quick to eat with her friends. “We ate spicy crab after the ceremony. The cast of Big White Duel <白色強人> plan on celebrating next week, to celebrate winning Best Drama and Kenneth Ma (馬國明) winning Best Actor. (Who’s going to treat?) It should be Kenneth Ma!”