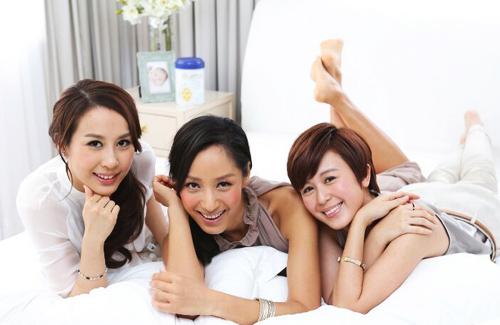 Leila Tong (唐寧), Mandy Cho (曹敏莉), and Coco Chiang (蔣怡) never shared the screen together before, but the three actresses do have one thing in common – motherhood. Recently, the three celebrity mothers came together to film a commercial for an infant formula company. The trio immediately bonded on the set, where they met each other for the first time, and happily shared their experiences of raising their children with each other and the staff.

Coco, Mandy, and Leila also showed off their super-mom skills when working with the child actor for the commercial. They took turns teasing and playing with the toddler, ensuing much laughter and glee on the film set.

Leila revealed that her son, Jun Jun, has just turned three years old. He is very clingy and often asks for his mother’s whereabouts. Soon heading to kindergarten, Leila said she is slowly training her son to become more independent. She also said she wants her son’s innate talents to shine, and will not put her son in a strict education regime. Leila hopes to have a second child and does not have a preference to a boy or girl.

Married to finance executive, Jacky Cheung, in 2010, Mandy is already a mother of two children. She shared that her two-year-old daughter, Dora, is extremely protective of her younger brother. “She likes to sing to her younger brother a lot, and would randomly say how much he loves him, and hugs him a lot. She likes to take her brother on little car rides. It’s really adorable!”

Coco, whose daughter is only one year old, expressed that her daughter is very opinionated and strong-willed. “She tells me what she wants. She likes to draw so I bought a lot of drawing books for her. She tells me she likes rice more than congee, so I let her eat more rice. I let her do what she likes.”