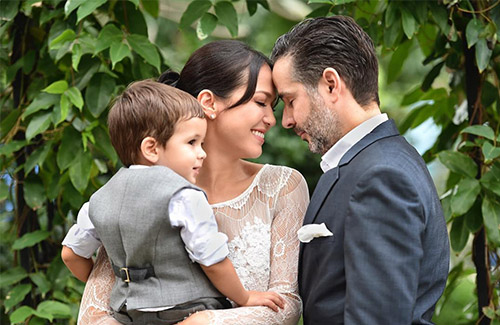 Actress-model Ankie Beilke (貝安琪) and her now husband, Simon van Damme, officially registered for marriage in October, one year after the birth of their son Sebastian. Earlier this week, the couple held their wedding banquet in Central, Hong Kong, at the Japanese restaurant where they first met. According to a source, the couple will hold a Chinese-style wedding banquet later this year. 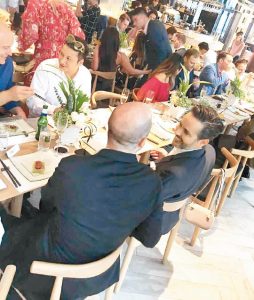 A low-profile celebration, the only celebrities who attended the banquet were models Coco Chiang (蔣怡) and Rosemary. However, the venue was filled with close friends and family. Ankie dazzled in a long white wedding gown as she went around the venue to toast the guests. Though busy, Ankie stayed close to her son, and she would occasionally go to the bar to feed her son.

“I’m happy for the three of them,” said Coco. “I’ve known her for years. I actually didn’t even know she wasn’t married! And that is really because I’ve always seen her so happy, and with such an adorable son. I hope she’ll continue to be with happiness.”

Ankie’s mother, former actress Ankie Lau (劉香萍), thanked the reporters for their blessings. When asked about the details of the wedding, she said, “You have to ask the newlyweds!”

Ankie released a press photo of her wedding later that night, and said, “Our wedding was so beautiful. And with our son by our side, everything became even more beautiful. Additionally, we had our close friends with us, making this simple yet ceremonious wedding even more fun and happy. We are filled with love and happiness. Thank you to all the friends who attended our wedding.”