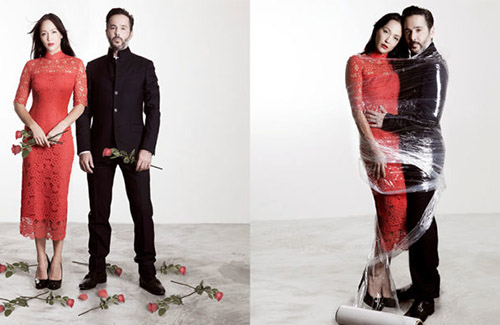 In 2016, German-born actress-model Ankie Beilke (貝安琪) and her fashion designer boyfriend Simon Van Damme got engaged. The following year, she gave birth to their son, Sebastian. On October 18th, the couple officially registered for marriage.

Simon, who is from Canada, is the son of fashion designer Marie France Van Damme, working as the brand’s marketing and communications manager. Ankie and Simon have been together since late 2015. 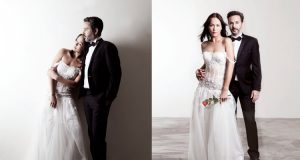 Revealing their wedding photos, Ankie and Simon employed the help of English photographer Nic Gaunt to helm their photoshoot. The shoot had two distinct themes—a western style in which Ankie wore a Susanna Soo wedding gown, and a Chinese style, in which Ankie wore a qipao by Yi-ming. Simon wore the Yat-Sen suit.

Ankie, who is half Chinese and half German, shared in an interview that they invited about ten close friends and family to attend their registration ceremony. They will hold a western wedding and a Chinese wedding next year.

“I was actually very worried during the registration ceremony. It felt like a serious occasion,” she said. In regard to her wedding next year, she said, “We will invite many friends to our western-style wedding. We want everyone to happily attend. As for the Chinese-style banquet, I’ll leave that for my mother to arrange. She has more traditional ideas. I am also her only daughter, and I will do my best to fulfill her wishes.”

Ankie admitted that her mother was upset with her when she was pregnant with Sebastian. Her mother had hoped that Ankie would get married first before having children. “But after my son was born, I have stepped into another stage of my life. The three of us are very happy together, and our son is a happy baby. We are all affected by him. My mother also would visit him often, and that improved our relationship. It is understandable that the previous generation would want to have kids after marriage, but I switched that around. Registration [for marriage] is for our parents and elders. Happiness for all!”