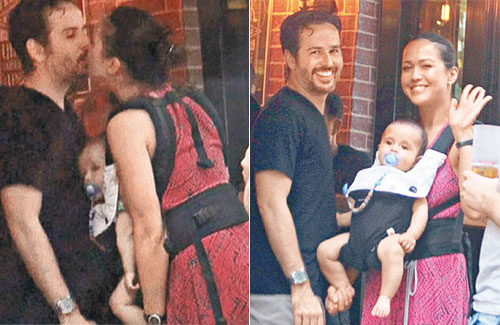 Ankie Beilke (貝安琪) and her fiancé Simon van Damme were spotted at a bar in Central, Hong Kong, where they brought along their five-month-old son, Sebastian.

The cute family of three ordered some drinks, including Ankie, but because she also has to breastfeed Sebastian, she only drank a few sips.

Ankie and Simon spent a few hours at the bar, chatting with friends and enjoying sandwiches. Every while and then Ankie would pick up Sebastian and carry him around. Chubby and alert, Sebastian interacted with Ankie’s friends with a smile on his little face. Halfway into their meal, Sebastian started crying; Ankie had to woo him to sleep, and kissed him a few times on the cheek.

When the couple discovered the paparazzi, they smiled and waved.

What a blissful family!