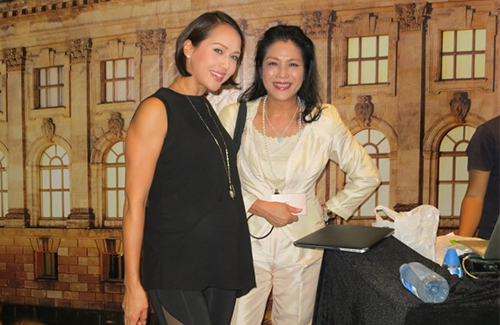 At Friday’s Hong Kong-Germany friendship event, actress-model Ankie Beilke (貝安琪) confirmed the news that she is over three months pregnant with her first child with boyfriend Simon, a fashion designer.

The 36-year-old Brother’s Keeper <巨輪> actress, who was briefly linked with Ruco Chan (陳展鵬), started dating Simon about a year ago. Ankie confirmed their relationship in an interview held in June.

Wearing three-inch heels to the event, Ankie said keeping the pregnancy a secret had been “very hard”, but was now glad that she could finally share the news with everyone.

Ankie, who is of Chinese and German descenet, was asked if foreigners also had the ancient tradition of keeping quiet about pregnancy in the first three months. Ankie explained, “It’s like that all over the world. The first trimester is the most dangerous stage of pregnancy. Miscarriages are the most common around that time.”

Asking if the baby was accidental or planned, Ankie merely laughed and didn’t respond. Her mother answered, “It is accidental, but they love children. She’s already getting old! Now is a suitable time.”

Will Ankie deliver the baby naturally or through cesarean section? Ankie said, “It doesn’t matter. Either way, giving birth will be painful.” (Is it a boy or a girl?) “I rather not say at this moment.” Ankie’s mother clarified, “Unless it’s too dangerous for the mother and the baby, it’s always better to deliver naturally.”

The couple plan to get married after delivering their child. Though it’s commonly advised for pregnant women to avoid cold drinks and food, Ankie said she hasn’t completely dropped them from her diet yet. However, she maintains a strict vegetarian diet as usual. Ankie’s mother shared that she didn’t really avoid any foods after giving birth to Ankie, but did point out that she breastfed Ankie until she was three years old. Ankie said she also plans to breastfeed.

Has Simon asked Ankie to lighten her workload? Ankie said, “Not at all. I love working. I love acting, drawing, and painting, so I will continue to do them.” (How many kids are you guys planning to have?) “It depends.” Ankie said her “accidental” pregnancy has not affected her job income at all. “Nothing has changed.”