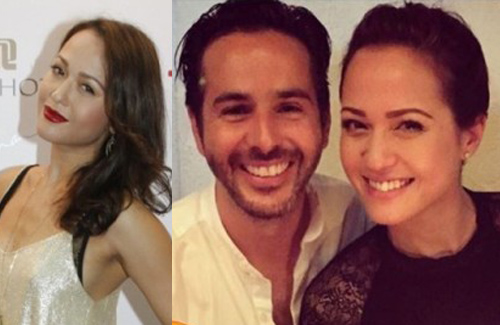 Although German-Chinese model Ankie Beilke (貝安琪) was romantically linked with Ruco Chan (陳展鵬) while filming 2013’s Brother’s Keeper <巨輪>, the pair denied the rumors. However, the 35-year-old beauty recently admitted to being in a new relationship while attending an art gallery opening.

Ankie revealed that she has been dating someone outside of the entertainment industry for several months. After much prodding, Ankie shyly admitted that her boyfriend is the man pictured in her Instagram post on her birthday. When asked whether her mother has met him, she said, “She’s seen him. I have known him for a long time.” Despite knowing each other for a long time, Ankie stressed that they will take things slow and will not rush into marriage.

In recent social media posts, Ankie shared many beautiful vacation pictures. When asked whether she was vacationing with her boyfriend, Ankie said that she was actually in Thailand for work. “I went to Thailand to film a commercial to help promote tourism. I went for 12 days to Bangkok and Chiang Mai.” Expertly switching the subject, Ankie further went on to reveal that she made time to practice Muay Thai while there. She praised the Muay Thai fighters in Thailand as having good bodies. “I like muscles, so I got to look!” However, she said she is not interested in deliberately finding a boyfriend who practices Muay Thai.