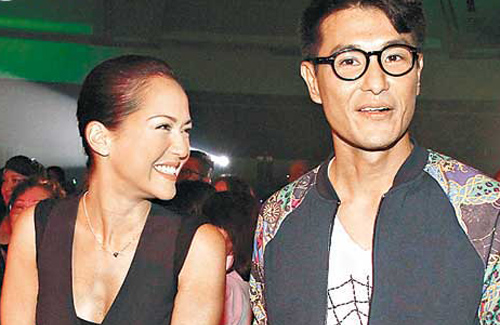 Ruco Chan (陳展鵬) and Ankie Beilke (貝安琪) generated intense chemistry together while filming TVB drama Brother’s Keeper <巨輪> last year. Evidently mutually attracted to each other, the pair went on a dinner date after filming wrapped up for the drama. Ankie highly praised Ruco, but revealed that their relationship did not progress since Ruco was too busy with work. Ruco had openly expressed his admiration for Ankie as well, calling her beautiful, talented, and intelligent before the press. On the set of Brother’s Keeper, he took great care of Ankie and taught her Cantonese. Tabloids claimed that the pair were involved for eight months, but separated due to differences in their personalities. However, both denied being in a relationship. In an interview yesterday, Ankie finally revealed the scoop.

“After filming Brother’s Keeper, we had a one-on-one date to drink beer and eat Portuguese food. We both had feelings [for each other],” the Chinese-German beauty said.

Ankie said she enjoys drinking beer with friends, as it creates a relaxing environment for good conversations. She had a good time on her date with Ruco and praised her former co-star, “He is very handsome, eloquent, and kind-hearted. Of course, I had feelings [for him]. However, he was very busy with work so we didn’t progress further.”

Although Ruco was subsequently linked to Linda Chung (鍾嘉欣), Ankie doesn’t believe in the rumors, citing that Linda already has a boyfriend. Since Ruco and Ankie are still currently single, is there room for further development?

Ankie does not seem to omit that possibility. While she hopes to collaborate onscreen with Ruco again, Ankie said she also wants to work Michael Miu (苗僑偉) as well. Since her performances in Brother’s Keeper and Line Walker <使徒行者> were praised by viewers, Ankie wants to film more TVB dramas and will work harder to improve her Cantonese.