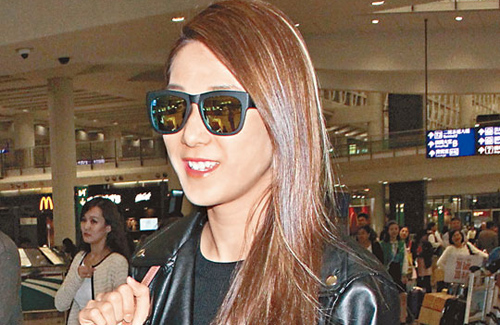 Recent tabloids claimed that Linda Chung (鍾嘉欣) had ended her long-time relationship with boyfriend, Philip Ng (伍允龍). However, Linda dispelled the rumors and revealed that they are still together.

After dating for eight years, it was speculated that Linda became unhappy with Philip’s career progress and shifted her focus to Ruco Chan (陳展鵬). Rumors fueled when Linda and Ruco were seen shopping in New Zealand in matching shirts. Furthermore, Ruco had posted a photo on Instagram earlier in which his hand was intertwined with a mysterious female hand, which was speculated to belong to Linda.

When asked if she mended her relationship with Philip, Linda smiled, “I won’t answer questions about my personal life. It’s impossible [for Ruco and I to be dating]! Ruco and I went to the supermarket with his manager.”

Although Philip was rumored to be appearing in an upcoming TVB series, Linda was confused when prompted about the issue. “I haven’t heard about it but I would give him tips. Of course it wouldn’t [be awkward]. Our relationship is okay.” Without hesitation, Linda revealed that she would not mind playing a couple with Philip, “Okay! We’re so close that it doesn’t matter – we’re both professional.”