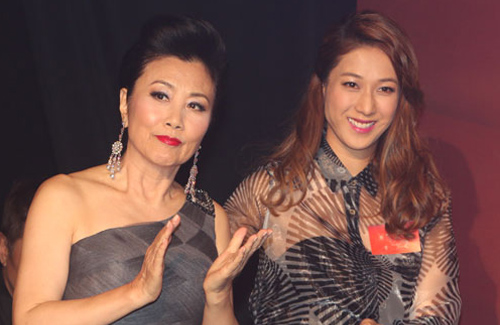 With Limelight Years <華麗轉身> premiering on April 27, the cast promoted the series by introducing the storyline and characters to local viewers.

Appearing in a beautiful one-shoulder gown, Liza Wang (汪明荃) made her grand entrance while escorted by Linda Chung (鍾嘉欣). Unfortunately, Liza had a wardrobe malfunction scare when Linda accidentally stepped on the trail of her long dress. Taking a while to free her heels from Liza’s dress, Linda expressed her embarrassment over the situation. Liza remained calm and quietly looked down at her dress throughout the event to prevent other artistes from stepping on the hem.

After completing promotions for Limelight Years, Linda will be filming Mainland Chinese drama Ne Zha <哪吒>. Despite the hectic schedule, Linda was in great spirits and expressed her excitement for the project to start.

However, Linda refused to comment on her relationship with Philip Ng (伍允龍). The couple reportedly broke up earlier due to differences in their career status. The latest reports claim that the couple has reconciled their 8-year relationship.

Damian Lau Not Stressed Over Ratings

Damian Lau‘s (劉松仁) partnership with Liza Wang is a highlight in the drama. Asked about his expectations for the ratings, Damian said, “I have never cared about the ratings. I know that it was a difficult filming process for Liza, so I will make her feel better. She is the soul [of the series], so I care about her more.”

In related news, Damian’s classic drama The Greed of Man <大時代> reaped excellent ratings during its current re-broadcast. A film version of The Greed of Man will reportedly be produced by TVB. Responding to the praise over the timeless content in the drama, Damian said, “When I re-watch it, I also cry. The script was very well-written.”