In contrast to the vast majority of superstars, Chow Yun Fat (周潤發) has a very simple lifestyle, spending only $800 HKD a month despite his massive wealth.

Having been in the industry for over four decades, Chow Yun Fat has accumulated a huge fortune and his net worth is estimated to be at $5.6 Billion HKD. One might think that with this fortune, Chow Yun Fat lives a very luxurious lifestyle, that consists of driving nice sports cars or residing in lovely mansions.

Instead, Chow Yun Fat is shown to be fairly frugal – often opting to take public transit and doing charity work instead of spending money on himself.

In an earlier interview, Fat Gor revealed that he only spends a mere $800 HKD monthly. He used his first-generation Nokia phone for over 17 years before making a switch two years ago to a smartphone – only because his Nokia stopped working. Never the person for anything fancy, Fat Gor is often seen shopping at discount shops. He expressed, “I don’t wear clothes for other people. As long as I think it’s comfortable, then it’s good enough for me.”

Instead of focusing his time on material matters, Fat Gor spends his free time on healthy habits such as hiking or going jogging. Often times when he is recognized while jogging, he happily poses for the cameras.

Fat Gor’s wife, Jasmine Tan (陳薈蓮), previously disclosed his net worth and his plan on donating the amount to various charities. Establishing their own charity several years ago, Jasmine supports Fat Gor’s decision in giving his money to different causes. On his reason for giving away his fortune, Fat Gor smiled, “The money’s not mine. I’m only keeping it safe for the time being.”

Expressing that money is not the source of happiness, Fat Gor added, “My dream is to be a happy and normal person. The hardest thing in life is not about how much money you earn, but how to keep a peaceful mindset and live the rest of your life in a simple and carefree manner.” 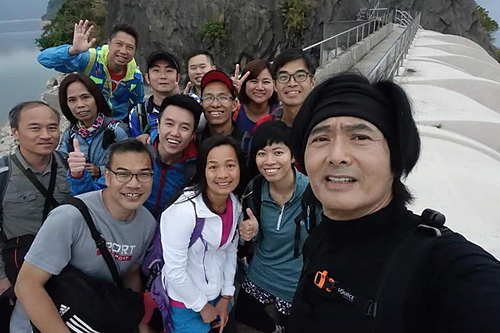 How Jasmine Tan Became the Woman Behind Chow Yun Fat