He encounters plenty of gorgeous women in the industry, but Chow Yun Fat knows that his wife Jasmine Tan is who he needs.

Despite his global stardom, it might come as a surprise that Chow Yun Fat (周潤發) does not have an artiste manager. Instead, his wife Jasmine Tan (陳薈蓮) is the one who co-ordinates all of the superstar’s work schedule. The couple has been married for over three decades since 1987, but remain childless after Jasmine suffered from a miscarriage.

Once Considered As Box Office Poison

Not many remember that before Chow Yun Fat attained superstar status, he once held the unflattering label of “box office poison”, as his early films had poor results. It was only when 1986’s A Better Tomorrow <英雄本色> was released that it gave him his lucky film career break.

In terms of his personal life, his one-time romance with former actress Idy Chan (陳玉蓮) is well-known. He also had a short-lived marriage with Candice Yu (余安安) which lasted just nine months. Luckily, he met his current wife Jasmine soon after.

Because of his previous failed marriage, the traditional man lost confidence in marriage. Instead of reassuring Jasmine, he had repeatedly told her during their courtship that “You must remember, I will not marry you.”

It is often said that women will change themselves for a man they truly love, and Jasmine had to make many difficult sacrifices in their relationship. While she was a doted daughter of a wealthy Singaporean businessman, Chow Yun Fat’s social standing seemed to pale in comparison, as he was just an actor from Lamma Island, who had achieved some popularity.

Surprisingly, she did not have a good initial impression of Chow Yun Fat. Although she found him charming and rather attractive when they first knew each other, she had heard many negative rumors about him which caused her to treat him as only a “normal friend”. However, Chow Yun Fat had taken the initiative and kept up his efforts over two years, writing love letters and asking her out for meetings, finally breaking down her wall of doubt and resistance.

Got Married in the Midst of Filming 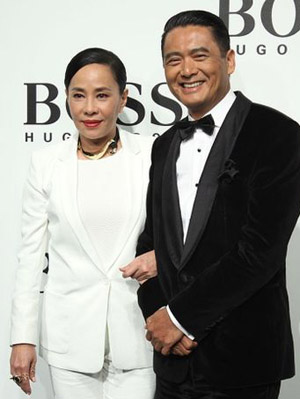 After she became his girlfriend, Jasmine had to leave behind the life in Singapore that she was used to, and accompany him to different countries for filming. In 1986, she followed him to New York for his on-location filming for An Autumn’s Tale <秋天的童話> in New York.

On a nondescript evening after late-night filming, when the actor knew he would have a day off thereafter, he suddenly said, “Why don’t we get married?” The next day, the couple got married in New York, without any fancy rings, flowers, nor extravagant ceremony.

Jasmine often says, “The best gift from the heavens in my life is to have the fortune to be the wife of Chow Yun Fat.”

Even while dating, Jasmine had to deal with haters’ scorn, who criticized her ordinary looks which they felt did not match up to Chow Yun Fat. He defended her, “I’ve seen plenty of women who look gorgeous, so much so that they become run-of-the-mill. Now, I choose my girlfriend based on inner beauty.”

As for what had attracted Chow Yun Fat, it was most likely Jasmine’s down-to-earth demeanor and gentleness. She once described herself as just an ordinary person who never puts herself on a pedestal. Friends of the superstar are also full of praise for his wife, saying “Miss Tan has a great temper and is very gentle, always listening keenly what he has to say. Chow Yun Fat found an exceptional woman!”