Famous for being filial, the actor would always make time for his mother.

Chow Yun Fat’s (周潤發) mother, Chan Lai Fong (陳麗芳), passed away at her residence on February 13, aged 98 years. A low-key funeral was held and after cremation, her ashes were placed at Lamma Island, their family home.

Fat Gor was the third in the family of four children, and his father Chow Yung Wan (周容允) was a sailor who was seldom home, hence the actor had been close to his mother since childhood.

Living on the island with his family, Fat Gor was an obedient child who started helping out on the fields when he was only six. When he grew older, he became aware of his family’s financial condition and would help his mother hawk cakes and fruits to supplement their income. Following his father’s premature demise, his mother became the sole breadwinner of the family.

Keen to reduce his mother’s financial burden, Fat Gor started working after high school, and has tried his hand at many jobs including polishing shoes, doing manual work in postal services to being an office assistant and hotel waiter.

At 18, the young Chow Yun Fat auditioned for the 3rd TVB Artiste Training Class and became an actor upon graduation. Working his way up gradually to become a leading man, he entered the film industry. His breakout role in 1986’s A Better Tomorrow <英雄本色> turned him into a bona fide movie star across Asia.

A Filial Son and His Mother’s Pride 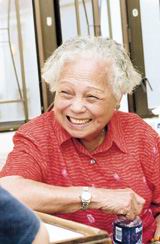 Finding massive success, Fat Gor was able to improve his family’s lifestyle, but never forgot that companionship would please his mother more than any amount of money would. Despite his busy schedule, he would make it a habit to spend at least half a day each week to be with his mother.

When Mrs. Chow started suffering knee joint issues years ago, the actor searched tirelessly for famous doctors and would drive his mother personally to the South China Athletic Association for her daily swim to help strengthen her body and benefit from physiotherapy practice.

Chan Lai Fong had said during a Mothers’ Day event in 2012 that Fat Gor was the most filial among her four children, and had especially made the effort to have breakfast with her on the occasion before flying to Beijing for filming.

Passionate about charitable causes, the elderly Mrs. Chow had actively taken part in many volunteering activities before she had mobility issues. At the World Outstanding Chinese Awards in 2008, the low-profile Mrs. Chow had this to say when asked how to be an outstanding mom, “I only teach my children to enter society and make a living. It’s good that they don’t become a liability.”

Chow Yun Fat once said that in his next life, he wished to be her son again.

Living Simple and Happy Life, Chow Yun Fat Plans to Give $5.6 Billion Net Worth to Charity