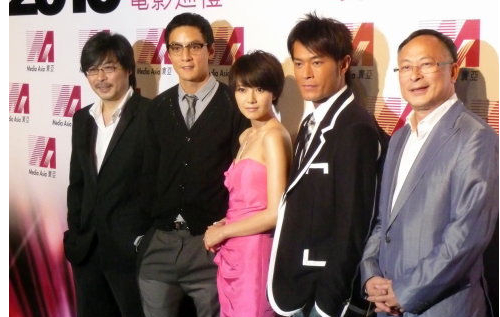 Portraying a talented financial manager with many girlfriends in the film, Louis introduces his subordinate, Gao Yuan Yuan, to his architect friend, Daniel Wu. Eventually, Louis realizes his feelings for Yuan Yuan and vows to win her back at all costs, even getting into a physical fight with Daniel. Since the script is still being revised, Louis said he does not know whether Yuan Yuan will choose Daniel or himself in the end.

Single Men and Women has been filming for nearly three months. Yesterday, a dozen reporters visited the set. Due to the strenuous filming schedule in China and Hong Kong , Louis has dropped twenty pounds and he almost fainted on the set yesterday. However, he still answered reporters’ questions patiently. When asked the requirements he had in selecting a partner, Louis replied, “I am a man of few words. Hopefully, she is tolerant of this aspect of my personality.”

On the first day of filming Single Men and Women, Louis and Yuan Yuan had to film their kissing scene. The Director and Assistant Director demonstrated how the scene should be executed. “I found the demonstration to be very amusing, but the Director solemnly told me to pay attention and that the kiss was not a funny scene. In the film, Gao Yuan Yuan and my offices are separated by two tall buildings. Our dating is not aided by the phone nor computer. When the audience watches the film, they will be surprised by how we communicate.”

Daniel Wu is currently on a leave of absence from filming Single Men and Women due to his recent wedding celebrations with his wife, Lisa S.

Jayne: I am looking forward to “Single Men and Women” although I don’t find Louis Koo to be too convincing as a financial manager. In most Hong Kong movies and television series, the professional jobs serve little use other than being glamorous backdrops for romantic stories.