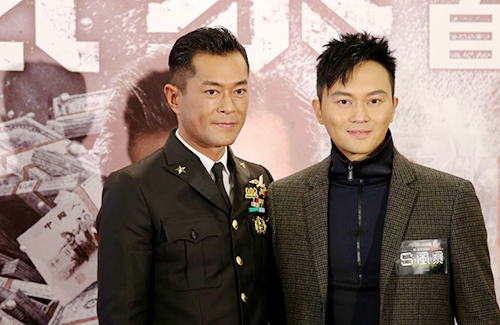 S Storm is the fourth collaboration between Louis and Chilam, both who have worked quite frequently with each other back during their TVB days. Louis and Chilam had played opponents in 1996’s Cold Blood Warm Heart <天地男兒>—and this rivalry will continue in S Storm.

Speaking about their rivalry, how is their relationship in real life? Louis said, “How do you want me to respond to that? Maybe HeHe (gay relationship)?” Chilam then said he had lost his “first time” to Louis, sharing, “The only wax burning experience in my life was with Louis.”

Wax burning, or wax boiling, was a local tradition practiced by many Hong Kong youths, in which they boil candlesticks in a container to celebrate the Mid-Autumn Festival. After several incidents of people getting severe burns, as well environmental concerns, the government banned the practice in the late 90’s.

Chilam said, “One year on Mid-Autumn Festival, me, Louis, and Anita Yuen (袁詠儀), went to look for a park in Central so we could boil some wax. We burned them in an empty moon cake tin. That was my only experience with wax burning. Obviously we can’t do that anymore because it’s illegal now.”

Louis and close friend Leo Ku (古巨基) recently released a cover single together to commemorate the 60th birthday of the late Leslie Cheung (張國榮). Louis, who had a successful singing career in the early 2000’s, admitted that singing would not be something he’d want do again.

Asking if Louis would be interested in performing the song live, he said, “No, thank you!” (How about being a guest performer at Chilam’s concert?) “No, please!” Chilam then said, “That’s a great idea! Hopefully I’ll get to have Louis Koo perform at my next concert!” Louis replied, “Please don’t!”

On the duet with Leo, Louis said, “I haven’t recorded songs in a long time and I’ve gotten very unfamiliar with the process. Gor Gor (Leslie Cheung) had guided and supported us back in our early days of debut. Leo wanted to do a song to remember him, so that’s why it happened.”

Leslie Cheung’s “Love of the Past” (當年情), performed by Louis Koo and Leo Ku