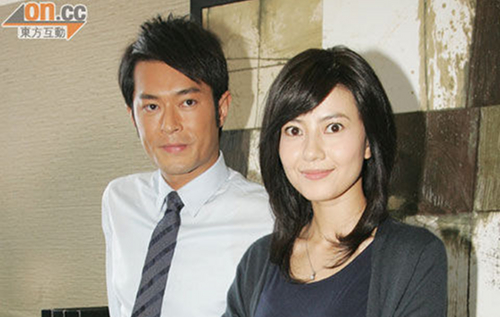 Louis Koo Tin Lok, Gao Yuan Yuan, Johnnie To and Wai Ka Fai are currently in the midst of filming new movie, Single Men and Women <單身男女>. Wearing a shirt and tie in one office scene, it was obvious that Louis had dropped significant weight.  Due to the extremely hot temperatures while filming in Hong Kong and Shanghai , Louis has dropped twenty pounds recently! His costumes had to be continuously altered due to his thin frame.

Gao Yuan Yuan and Louis shared a passionate kiss in one scene, which was quite humorous since the pair kissed while attempting to tidy the house and close the lights.  Was there any embarrassment during the kissing scene? Yuan Yuan said, “Actors have to be immersed in their roles!” Yuan Yuan indicated that she communicated in Mandarin with Louis, complimenting on her co-star’s improvement in the dialect.

Recently, Andy Hui Chi On announced splitting from Michelle, his girlfriend of three years. Due to the media’s speculation that Andy and Sammi Cheng Sau Man may re-ignite their previous love relationship, Sammi wrote a long post on her blog stating that she and Andy never reunited after breaking up many years ago. Since they were former co-stars, the media questioned Louis about Sammi’s blog entry. Louis said, “I will not respond towards other artists’ relationships. The news is the news! There is more credibility in Sammi’s blog post, since she wrote it in her own words.”

Jayne: Louis and Gao Yuan Yuan make a lovely couple. It’s awkward that the press asked Louis Koo about his opinion towards Sammi and Andy’s rumors; what is he supposed to say about it except that it’s not his business??