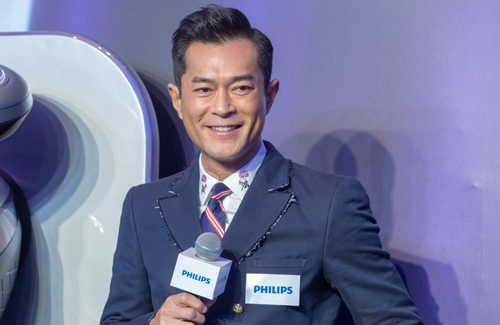 Louis Koo (古天樂) has been suffering from a cervical shift in which he just flew to the United States in late October for a major operation. Although it will take half a year for Louis to fully recover, he is already back to work today at a promotional event.

Louis is known for his busy filming schedule, alongside running his own entertainment company. Admitting that in the past two years, he has been suffering from neck pains and tingling sensations in his fingers but never sought for medical help. He said “Two days after my birthday, I was diagnosed with a cervical shift that was squishing my nerves, so I decided to go to the United States for my surgery. They replaced my C5 and C6 vertebrate [in the base of the neck] with titanium.”

After the surgery was completed, Louis started attending events the week after in which fans expressed their concern. He shared that he has already pushed a lot of jobs to rest and he is excited to be working again because the half year rest is for full recovery, so there isn’t much impact if he takes on light jobs.

Louis shared that it was his first ever surgery and due to fear, the doctors suggested physiotherapy and medication as an alternate, but he said, “With filming, it’s hard to take time to go to physiotherapy. I would rather complete the surgery and experience the pain once, then contain it with drugs.”