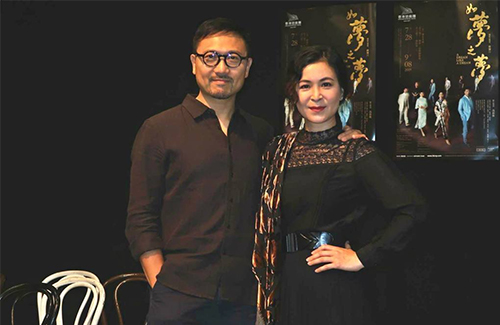 In May of this year, Hong Kong media speculated that actors Louisa So (蘇玉華) and Poon Chan Leung (潘燦良) had officially tied the knot after 24 years of dating. They had quietly submitted marriage papers that same month, out of the media’s loop. The couple later confirmed that the reports were true, but did not divulge any more details.

Attending an event for ovarian cancer today, Louisa finally opened up on why she finally decided to tie the knot with Poon Chan Leung after a stable, two-decade relationship.

“We finally had time to get married because of the pandemic,” she joked with a laugh.

Louisa and Poon Chan Leung did not have a big ceremony, nor did they make it a big deal.  Marriage was a very casual decision.

“We casually went online to look for a lucky date to get registered,” said Louisa. “I chose to wear a simple white dress. He just put on a tie. We’re both chill like that.”

They obtained their marriage license and exchanged rings through the witness of their parents. “And then we contributed to the HK economy by staying at a hotel for two nights,” Louisa said with a laugh. “That was our honeymoon.”

On their reason for getting married after so many years, Louisa said, “It was to fulfill my mother’s wish. After 24 years, she believes that it’s about time we become official. I had to clarify to my mother, that getting married and holding a wedding are two different things. We do not plan on having a wedding.”

Louisa and Poon Chan Leung originally wanted to surprise her mother about the marriage, but the media had a headstart in discovering the news, so Louisa had no choice but to tell her sooner than planned.

The couple met in 1988. Both were lead stars in a play headed by their alma mater, the Hong Kong Academy for Performing Arts. In 2015, Poon Chan Leung successfully proposed to Louisa while they were vacationing in Japan. Louisa said she would agree to a wedding ceremony if it was held then, but the wedding never happened. “We were too lazy,” she said.

“We already considered each other as family,” she added. “That’s why we were never in a rush to make it official.”