Louisa So to Leave TVB: “I Want More Freedom” 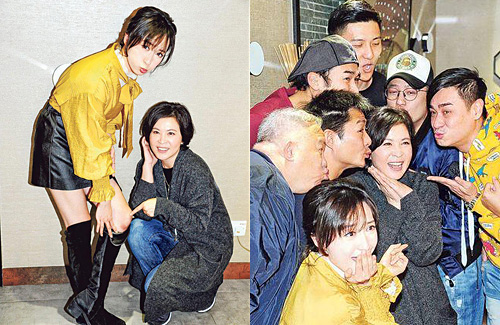 Celebrating her 49th birthday with the cast and crew of The Forgotten Valley <平安谷之詭谷傳說>, Louisa So (蘇玉華) confirmed that this is her last TVB series. Louisa said, “I want to give myself more freedom and space to do different things.”

After watching the premiere episode together on Monday night, the cast of The Forgotten Valley went out to dinner and surprised Louisa with a birthday cake. On the actual day of her boyfriend, Louisa will attend an acting class with her boyfriend. He will cook an Alaskan King Crab meal for her at home.

Louisa confirmed that she will be leaving TVB for an indefinite amount of time in order to pursue other interests. However, she ended her working relationship with TVB on good terms and expressed that there may be an opportunity for her to return in the future.

On her upcoming work projects, Louisa revealed that she will be filming music video. She laughed that the first time she filmed a music video was when she was still in acting school. Also she will be going to Beijing to speak before a group of acting school students. Although she has given lectures in Hong Kong before, this is the first time Louisa will be doing so in Beijing. Afterward, Louisa will be doing voice dubbing for a cartoon.

Close friends with Louisa, Katy Kung (龔嘉欣) organized the dinner celebration last minute. However, Grace Chan (陳凱琳), Zoie Tam (譚凱琪), and Jess Shum (沈卓盈) were unable to make it. As the only single woman in the group, Katy said the other women were worried about her love life and offered to introduce some men to her.

When asked if she bought peach blossoms to give her love life a lucky boost, Katy laughed and said every time she buys them, she  transfers the luck to others instead. Katy exclaimed, “For example, my makeup artist helped me move my peach blossom tree last year and now she is married. This time, I’m not letting anyone touch my peach blossom tree! However, I hope that I’ll be able to get Grace’s red packet soon.”

Asked if Katy meant Grace will be getting married soon, Katy said “I meant work red packet, but I’m sure it won’t be long for the three girls. I think I’m going to end up being a bridesmaid three times first.”

6 comments to Louisa So to Leave TVB: “I Want More Freedom”